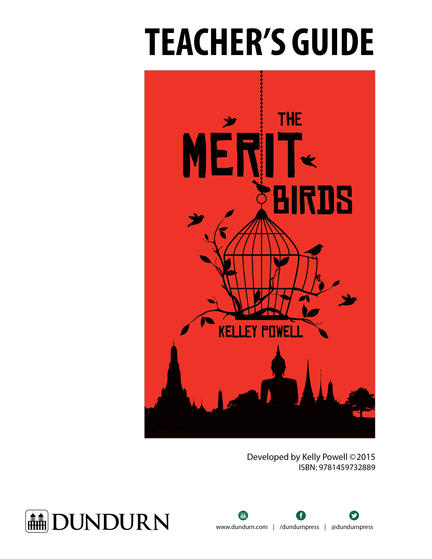 2015 Dewey Divas Pick
2016 Booklist Top Ten Multicultural Fiction List, Youth Spotlight
Cam is finally settling into his new life in Laos when tragedy strikes and he’s wrongfully accused of murder.
Eighteen-year-old Cam Scott is angry. He’s angry about his absent dad, he’s angry about being angry, and he’s angry that he has had to give up his Ottawa basketball team to follow his mom to her new job in Vientiane, Laos. However, Cam’s anger begins to melt under the Southeast Asian sun as he finds friendship with his neighbour, Somchai, and gradually falls in love with Nok, who teaches him about building merit, or karma, by doing good deeds, such as purchasing caged “merit birds.”
Tragedy strikes and Cam finds himself falsely accused of a crime. His freedom depends on a person he’s never met. A person who knows that the only way to restore his merit is to confess. The Merit Birds blends action, suspense, and humour in a far-off land where things seem so different, yet deep down are so much the same.

Kelley Powell has worked at a home for impoverished women and children in India, on a domestic violence research project in Laos and with the Canadian government’s family violence prevention unit. Her writing has appeared in a variety of publications, including the Globe and Mail and Maclean’s. She has a master’s degree in international development. Kelley lives in Ottawa.

Drawing on her own experience, Powell has set the story of 18-year-old Cameron in the exotic world of Vientiane, Laos. Her deep, almost native knowledge of Lao culture (Powell states in a ‘Dear Reader’ note that she lived and worked in Laos) makes for a very authentic setting and genuine local characters.

The story is artfully told … rich in details of life in Laos and Thailand.

… Kelley Powell writes with sensitivity about culture, poverty and goodness in her debut novel.

… the story offers an insightful window into Laotian life, history, and traditions while reminding readers that redemption can carry a heavy cost.

… a thought-provoking story that will appeal to older teens willing to expand their worldview.

(Starred Review) A fresh, gripping page-turner that takes readers on a journey through one young man’s escape from anger into a place of peace.

By moving away from the multicultural clichés and tropes one has come to expect from YA stranger-in-a-strange-land stories, Powell creates something unique — a story rooted in characters that are realistically, if unpleasantly, depicted.

Other titles by Kelley Powell