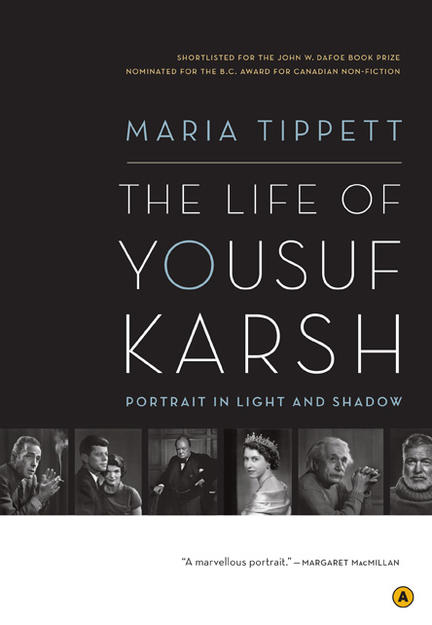 The Life of Yousuf Karsh: Portrait in Light and Shadow tells, for the first time ever, the full story of how a young Armenian immigrant living in Ottawa in the 1930s became the most prominent portrait photographer of the twentieth century. Acclaimed biographer Maria Tippett was granted unprecedented access to the private section of the extensive Karsh archives, and interviewed family members and former colleagues of Karsh (1908-2002). Photographs by Karsh, including those of iconic figures such as Winston Churchill, Albert Einstein, Elizabeth Taylor, Pablo Picasso, John F. and Jacqueline Kennedy, Pierre Elliott Trudeau, and Bill and Hillary Clinton, are featured throughout the book.

The book was produced with the full cooperation of the Karsh estate, and reveals the consummate skill with which Yousuf Karsh built and maintained his reputation over six decades.

Dr. Maria Tippett is one of Canada's most prominent cultural historians and the author of many books on art, culture, and history, including Emily Carr; Stormy Weather: F.H. Varley, a Biography; and Bill Reid: The Making of an Indian. She has lectured extensively on Canadian art and culture in North and South America, Japan, and Europe, and has curated exhibitions in Canada and abroad. Her books have won numerous awards, including the Governor General's Literary Award for Non-Fiction and the Sir John A. Macdonald Prize for Canadian History. A Fellow of the Royal Society of Canada, she was for many years a Senior Research Fellow at Churchill College, Cambridge, and a member of the Faculty of History at Cambridge University. Maria Tippett lives with her husband, historian Peter Clarke, in British Columbia.

...what if Karsh had simply offered the world his other photograph of a harmless [Winston] Churchill merrily smiling like a jovial figure on a Toby jug? Would the photo have energized our troops and rattled the Nazis? The story behind that Churchill portrait is told in detail, like never before...by British Columbia author and art historian Maria Tippett.

...a fascinating recounting of the life of Canada's most famous portrait photographer...The flow of the story is excellent, even when describing photographic techniques, and the book is well organized, with...key photographs placed strategically within the text...Tippett displays remarkable insight into human nature and paints a picture as vivid as those created by Karsh himself.

One of Canada's leading cultural historians...[Tippett] sheds light on a remarkable Canadian whose name is synonymous with photographic excellence.

...splendidly readable...If Karsh insisted on providing each of these portraits with an accompanying anecdote, Tippett returns the favour by seeding her text with vivid Karsh images of Churchill, Hemingway, Khrushchev, Eleanor Roosevelt, Joan Crawford and Grey Owl.

[Tippett] captures the depth and the superficiality, along with the wisdom, the humor and pain of Karsh...she brings the exceptional Armenian-Canadian photographer back to life for a whole new generation. And with her engaging Karsh anecdotes are several dozen Karsh photos-several of them rarely seen, many of them worthy of a long gaze.

Other titles by Maria Tippett

Made in British Columbia

Art at the Service of War

Canada, Art, and the Great War

Portrait in Light and Shadow /hc

The Life of Yousuf Karsh

English-Canadian Institutions and the Arts before the Massey Commission