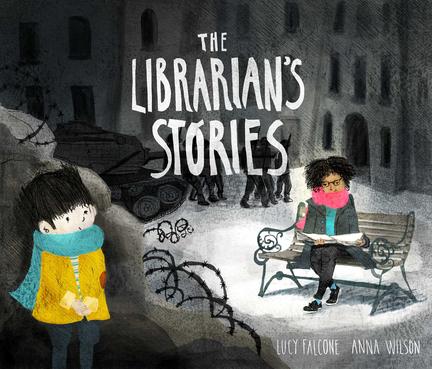 A town is left in ruins after the bombs fall.
The beloved library is turned to ash.
Home will never feel the same.

But then one day, the Librarian appears in the square. Seated on a bench in front of the library ruins, she opens a book and begins to read aloud. The village children stop to listen. "Foolish woman," Papa says. "Too dangerous," Mama agrees, hurrying the children away. Day after day, as she returns to her post, the Librarian’s stories bring comfort to the broken hearts of the people. Little by little, seeds of hope are planted, and the town begins to heal. Inspired by the true story of the Cellist of Sarajevo, a compassionate musician who played his cello for 22 days to honor the deaths of 22 innocent people killed after the bombing of a bakery during the Bosnian war.
The Librarian's Stories is a testament to the enduring connection between stories and hope.

Lucy Falcone was a serious couch potato growing up. Her love of watching television inspired a dream to become a television and screen writer. Lucy’s first job was writing for CTV’s The Littlest Hobo. After moving to Los Angeles, she wrote for Nickelodeon’s hugely popular series, Are You Afraid of the Dark. Lucy also started a production company, Northwind Productions, and produced a situation comedy pilot titled Choir Practice starring Susan Anton and Elaina Reed Hall.
In 2003 Lucy turned her hand to writing novels. Her middle-grade supernatural thrillers include The Mysterious Mummer, Walking with the Dead, The Devil, The Banshee and Me, and The Midnight Curse. These four novels have garnered nine nominations, four wins, and two Honour nods. Lucy has also created a comedic, kid-detective series The Ghost and Max Monroe.
Lucy’s debut picture book, I Didn’t Stand Up, (inspired by the poem First They Came… by Martin Niemoller) won the 2019 Elementary Teachers Federation of Ontario Children’s Literature Award. The Librarian’s Stories is her second, emotionally resonant picture book.

Anna Wilson is a freelance designer and illustrator who has spent most of her adult life traveling the world. She loves storms and snow and is happiest running in the mountains or drawing in the streets of new cities. This is her first picture book.

"Falcone wanted to stress the importance that libraries of the past and present have on a community and that those who sought to destroy them understood this importance and felt threatened by ideas and knowledge."

"By choosing to show us what is impactful for a child, Lucy Falcone gives a perspective that is elementary but profound by contrasting the darkness of conflict with the light of literacy."

"An earnest tale about the power of story."

Other titles by Lucy Falcone

I Didn't Stand Up