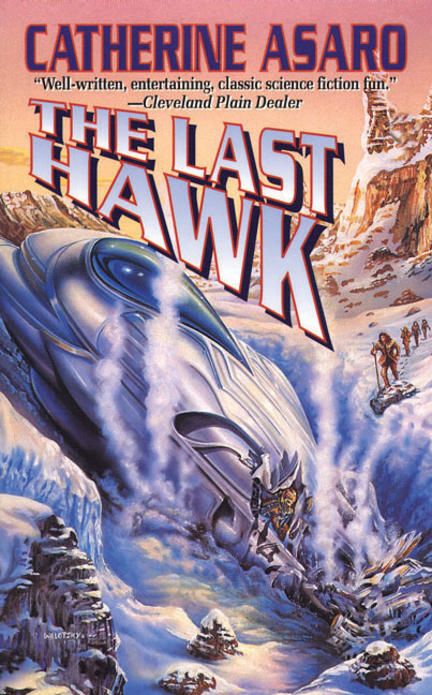 When Kelric, a scion of the imperial family of Skolia, crash-lands his fighter on the off-limits planet of Coba, he figures it will be only a short time before he makes his way home. But he fails to account for the powerful matriarchy of Coba, the mistresses of the great estates who do not want the Empire to know about their recent cultural advances.

First they take him prisoner.

Then, one by one, the most powerful women on the planet fall in love with him!

Catherine Asaro was born in Oakland, California and grew up in El Cerrito, just north of Berkeley. She received her Phd in Chemical Physics and MA in Physics, both from Harvard, and a BS with Highest Honors in Chemistry from UCLA. Among the places she has done research are the University of Toronto in Canada, the Max Planck Institut für Astrophysik in Germany, and the Harvard-Smithsonian Center for Astrophysics. Her research involves using quantum theory to describe the behavior of atoms and molecules. Catherine was a physics professor until 1990, when she established Molecudyne Research, which she currently runs.
A former ballerina, Catherine has performed with ballets and in musicals on both coasts and in Ohio. In the 1980s she was a principal dancer and artistic director of the Mainly Jazz Dancers and the Harvard University Ballet. Catherine still teaches ballet in Maryland.

Catherine's fiction is a successful blend of hard science fiction, romance, and exciting space adventure. She has published more than ten novels, almost all of which belong to herSaga of the Skolian Empire, includingThe Quantum Rose, which won the Nebula Award for best novel of 2001

Her husband is John Kendall Cannizzo, an astrophysicist at NASA. They have one daughter, a young ballet dancer who loves math.

"Rising star Catherine Asaro exploded onto the science fiction scene with all the blazing glory of a supernova with her first book called Primary Inversion. Now, in the third tale of the Skolian Empire, we see not only the powerful characterization and intriguing scientific concepts of the first two books, but also an elegant subtlety and a far-reaching sense of destiny that carries her to the highest rank of master storyteller."--Romantic Times

"The Last Hawk is a true gem, with believable hard science, human drama, and people and events that will draw in any perceptive reader. Impossible to put down,The Last Hawk embodies excellence in prose and science fiction, an excellence all too rare in any era."--L.E. Modesitt, Jr.

Other titles by Catherine Asaro

Part One of Triad

A New Novel in the Saga of the Skolian Empire

A Novel in the Saga of the Skolian Empire