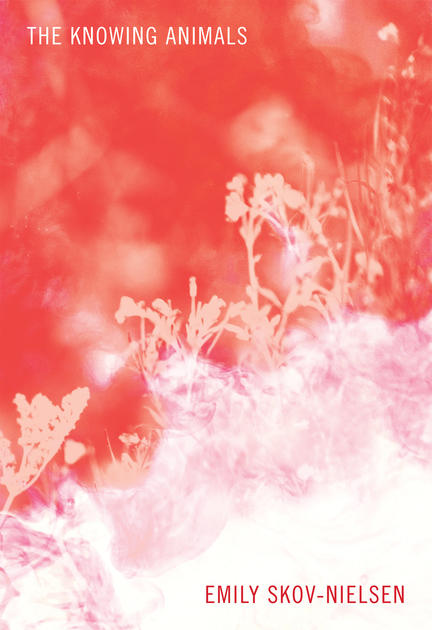 Poems that sing, in various notes of female voice, the human being as an embodied, contemplative, feeling animal.

In Skov-Nielsen's thrumming debut, The Knowing Animals, our consciousness is interconnected with the surrounding trees, bugs, rivers, atmospheres, and cosmos. Here, flowers escape Victorian domestication and ally with girls' green powers of attraction. Here, the social politeness of motherly domesticity and the raw dangers of adolescent sexual awakening are shot through with blood pulsing under the skin, with oxygen exchanged in gasps of breath. Here, everything tender and petalling is also raw and mothervisceral.

This is a book of entanglements: the poems twist and turn through a plurality of metaphorical associations involving botany, zoology, astronomy, biology, psychology, and mythology to complicate and expand human conceptions of nature. At the same time, they explore themes such as motherhood, pregnancy and birth, sexuality, adolescence, and the rise of technology, all the while shifting through a variety of tones: romantic, mythological, religious, scientific, wistful, and playful.

EMILY SKOV-NIELSEN is an MA graduate from UNB's English/Creative program. Her poems have been published (and longlisted in several contests) in journals across Canada including The Malahat Review, The Fiddlehead, The Puritan, CV2, Prairie Fire, and Prism International. She is the author of Volta (Anstruther Press, 2017). She currently works for The Fiddlehead, Atlantic Canada's International Literary Journal. In the past she worked for several years at a bookstore, was an Adult Education Instructor, and has dabbled in social work. She currently lives and writes in Fredericton, NB.

"These poems prod and sing, distilling language with technical precision and the intimacy of a perceptive mind at work. Skov-Nielsen speaks to the urgency of the world we inhabit, particularly attuned to how the personal is entangled with the ecological. The Knowing Animals is incisive and insightful, a debut that rouses us into a realm ‘suspended between the gutter / and the incandescent bulb of sky.’” —Cassidy McFadzean, author of Hacker Packer and Drolleries

“Saturated and prowling with a mesmerizing, tear-away cast of nocturnal animals, satellites, fireflies, toadstools, and Instagram characters playing their hands fast and loose—they may lay claim to this lush book, but don’t be lulled or gulled. These daring, over-the-top, five-sided, lyrical poems will keep you awake, basking in fever-bright light, rewilding and transforming your life, if you let them through the door.” —Jan Conn, author of Tomorrow’s Bright White Light

“The Knowing Animals drops an omniscient wild into multi-generational domesticity. Skov-Nielsen’s poems burst cellular, a corporeal blossoming that mistakes technology for bird call, often blurring the line between human-animal identities. Like a live rabbit freed from the fox’s mouth, these poems twitch to run.” —Emily Nilsen, author of Otolith