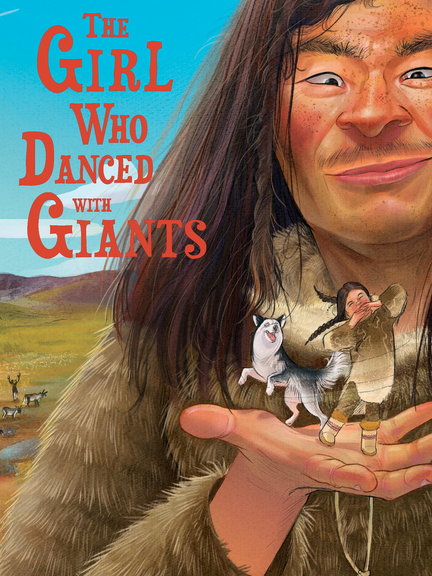 Iviit doesn’t want to stay at her camp and clean skins. It’s so boring! She would much rather go exploring and sing and dance.

One day, Iviit sneaks away from her camp and meets a new friend named Kaaktuq. But Kaaktuq is no ordinary friend—he is a giant! Iviit and Kaaktuq spend a fun summer together, but Iviit soon realizes she has a giant problem on her hands. Will Iviit be able to help Kaaktuq without her family ruining her plans?

Shawna Thomson grew up in southern Ontario but has called Nunavut home since 2011 when she moved to Taloyoak. She currently works as an educator in Iqaluit, where she lives with her husband and their two dogs. Since moving to Nunavut, she has always been fascinated by stories of the giants and the little people. When she is not writing or teaching, she enjoys running, yoga, going hiking with her dogs, or reading historical fiction.

Tamara Campeau’s illustration journey began at Dawson College, where she earned her associate degree in illustration and design. Shortly after, she furthered her studies at Sheridan College, where she obtained her bachelor’s degree in illustration with honours. Tamara works digitally to bring stories to life through her painterly illustrations. Her work has a strong sense of lighting and vibrant colour palettes, along with dynamic compositions. She loves creating endearing characters with a strong sense of personality and emotion. Her work is inspired by wildlife, children, and the environments they reside in. She uses this inspiration to add a layer of realism to her illustrations. When she’s not at her desk, she can be found breaking a sweat at the local gym or exploring nature with her standard poodle, Peanut.

Other titles by Shawna Thomson

Spencer and Gary Help Their Elders

Spencer the Siksik Solves a Problem

Spencer the Siksik Helps His Friend

The Girl Who Danced with Giants

The Girl Who Danced with Giants (Inuktitut)

Other titles by Tamara Campeau

The Girl Who Danced with Giants

The Girl Who Danced with Giants (Inuktitut)

In the Sky at Nighttime