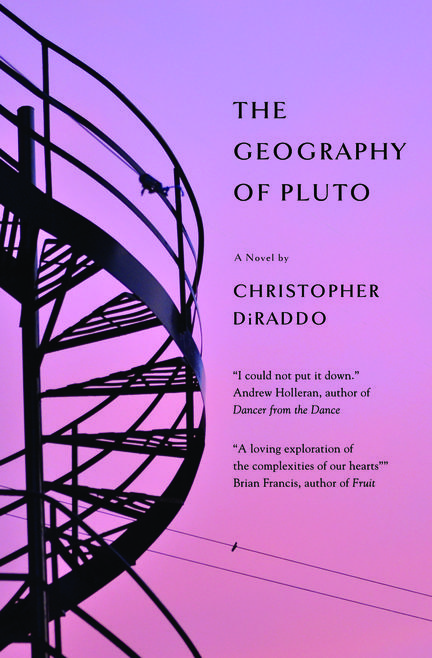 Twenty-eight-year-old Will, a teacher living in Montreal, has spent the last few months recovering from a breakup with his first serious boyfriend, Max. He has resumed his search for companionship, but has he truly moved on?

Will’s mother Katherine — one of the few people, perhaps the only one, who loves him unconditionally — is also in recovery, from a bout with colon cancer that haunts her body and mind with the possibility of relapse.

Having experienced heartbreak, and fearful of tragedy, Will must come to terms with the rule of impermanence: to see past lost treasures and unwanted returns, to find hope and solace in the absolute certainty of change.

In The Geography of Pluto, Christopher DiRaddo perfectly captures the ebb and flow of life through the insightful, exciting, and often playful story of a young man’s day-to-day struggle with uncertainty.

CHRISTOPHER DIRADDO has published four short stories in anthologies by Arsenal Pulp Press, including the Lambda Literary Award-winning First Person Queer. Currently, he works for CBC Radio in Montreal as a content editor for Canada Writes. The Geography of Pluto is his first novel.

“What is also noteworthy about this novel is its versatility. It can be categorized as an urban story, as gay literature, or as a mainstream Canadian novel, equally comfortable on any of those shelves […] a voyage well worth taking.”

“The book’s crystalline prose makes for an incredibly smooth read but the most impressive technical accomplishment is the timeline. Picture a young man watching TV in his mother’s humble Plateau apartment, or marking high school geography exams … until he’s suddenly catapulted into the past, recalling a moment of discovery, intimacy, or regret. The lucidity of the remembered scene is so profound that it flings him out into yet another recollection as vivid as the first.”

“DiRaddo’s first novel is a terrific debut that will have you mulling over the characters long after you’ve finished. They resonate that strongly. Highly recommended.”

“A sharply written time capsule of gay Montreal in the 1990s.”

Other titles by Christopher DiRaddo

Geography of Pluto, The