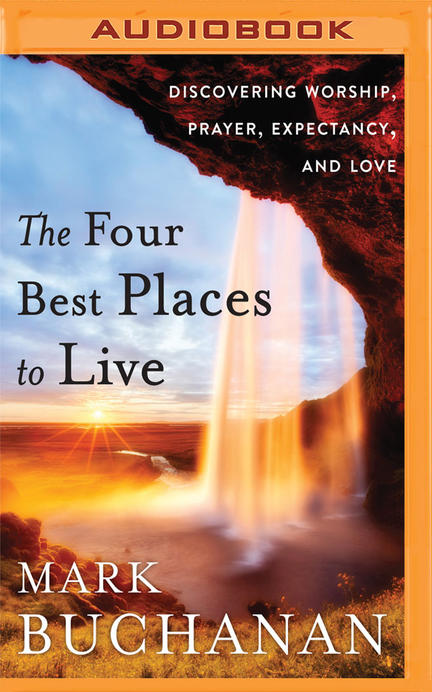 Of all the places to live on Earth, what are the best? Every year, the United Nations determines which countries answer this question. Money magazine asks the same question about cities across the United States. Forbes magazine completed a similar assessment on a global scale.

In The Four Best Places to Live, Mark Buchanan evaluates the four best places to live—not according to the United Nations, Money, or Forbes—but according to God and Scripture. Where do we find the greatest joy, peace, and wisdom? Where can we go to experience the deepest sense of belonging? Is there a place that abounds with adventure where we can also feel safe, refreshed, and joyful? With compelling insight, Buchanan explores what God has revealed in His Word about where we become most alive, become most fully ourselves, and can dwell most closely with Him.

Mark Buchanan is the award-winning author of seven books, a popular conference speaker, a professor, and a frequent contributor to Christianity Today. He says he writes because he can’t help it, a passion that started when he was twelve after a fifth grade teacher awakened in him the possibilities of language and story. Speaking about his passion, the local church, he says, “I became a pastor not because I intended to, but because God has a sense of humor. He saw something in me neither I nor anyone else saw, and he drew me down a path that has been the hardest and best of all.”

Mark holds a bachelor’s degree in fine arts from the University of British Columbia and a master’s degree in interdisciplinary studies from Vancouver’s Regent College. Mark served as the senior pastor of New Life Community Baptist Church in Duncan, B.C., for seventeen years and now holds the position of Associate Professor of Pastoral Theology at Ambrose Theological Seminary in Calgary, Alberta, Canada.

When not teaching, writing, or speaking, Mark can be found riding his motorcycle, drinking dark, rich coffee, or enjoying fishing, scuba diving, skiing, gardening, or woodworking.

Other titles by Mark Buchanan

Moving at the Speed of Your Soul

Other titles by Tom Parks

How We Sipped, Danced, and Stumbled Our Way to Civilization

Populism, Immigration, and the Future of White Majorities

32 Short Stories by Persons of Interest