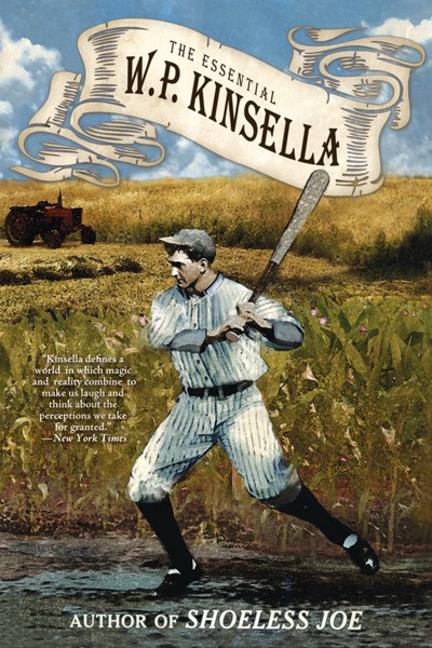 This career retrospective celebrates the 80th birthday of baseball's greatest scribe, W. P. Kinsella (Shoeless Joe), as well as the 25th anniversary of Field of Dreams, the film that he inspired.

In addition to his classic baseball tales, W. P. Kinsella is also a critically-acclaimed short fiction writer. His satiric wit has been celebrated with numerous honors, including the Order of British Columbia.

Here are his notorious First Nation narratives of indigenous Canadians, and a literary homage to J. D. Salinger. Alongside the "real" story of the 1951 Giants and the afterlife of Roberto Clemente, are the legends of a pirated radio station and a hockey game rigged by tribal magic.

Eclectic, dark, and comedic by turns, The Essential W. P. Kinsella is a living tribute to an extraordinary raconteur.

W.P Kinsella is one of Canad's best selling and most prolific writers. His novels and short story collections includeDance Me Outside and Shoeless Joe (Field of Dreams), both of which were made into movies, as well as The Dixon Cornbelt League, Box Socials, The Iowa Baseball Confederacy, The Winter Helen Dropped By and If Wishes Were Horses. He has received numerous awards for his work, including the Houghton Mifflin Literary Fellowship and the Order of Canada. He lives in a "new" old house in British Columbia's Fraser Valley.

From Chapter One of "Shoeless Joe Jackson Comes to Iowa"

My father said he saw him years later playing in a tenth-rate commercial league in a textile town in Carolina, wearing shoes and an assumed name.

?He’d put on 50 pounds and the spring was gone from his step in the outfield, but he could still hit. Oh, how that man could hit. No-one has ever been able to hit like Shoeless Joe.”

Two years ago at dusk on a spring evening, when the sky was a robin’s-egg blue and the wind as soft as a day-old chick, as I was sitting on the verandah of my farm home in eastern Iowa, a voice very clearly said to me, “If you build it, he will come.”

The voice was that of a ballpark announcer. As he spoke, I instantly envisioned the finished product I knew I was being asked to conceive. I could see the dark, squarish speakers, like ancient sailors’ hats, attached to aluminum-painted light standards that glowed down into a baseball field, my present position being directly behind home plate.

In reality, all anyone else could see out there in front of me was a tattered lawn of mostly dandelions and quack grass that petered out at the edge of a cornfield perhaps 50 yards from the house.

Anyone else was my wife Annie, my daughter Karin, a corn-coloured collie named Carmeletia Pope, and a cinnamon and white guinea pig named Junior who ate spaghetti and sang each time the fridge door opened. Karin and the dog were not quite two years old.

?If you build it, he will come,” the announcer repeated in scratchy Middle American, as if his voice had been recorded on an old 78-rpm record.

A three-hour lecture or a 500-page guide book could not have given me clearer directions: dimensions of ballparks jumped over and around me like fleas, cost figures for light standards and floodlights whirled around my head like the moths that dusted against the porch light above me.

That was all the instruction I ever received: two announcements and a vision of a baseball field. I sat on the verandah until the satiny dark was complete. A few curdly clouds striped the moon and it became so silent I could hear my eyes blink.

?[STAR] The career of the incomparable Kinsella (Shoeless Joe) is beautifully represented by these 31 short stories, including, of course, “Shoeless Joe Jackson Comes to Iowa,” the haunting tale of a baseball fan’s obsession with a long-dead star that was developed into a bestselling novel and then the film Field of Dreams. Other charming baseball fantasies include “The Night Manny Mota Tied the Record,” in which a fan agrees to sacrifice himself to bring back the recently dead Yankees star Thurman Munson, and “Searching for January,” which concerns an encounter with the deceased Roberto Clemente. Alongside these stories are several more realistic and mostly gentle satires, such as “The Fog,” that present the escapades of several indefatigable members of Canada’s First Nations. “The Grecian Urn” concerns a couple who can inhabit the interior worlds of great works of art. “K Mart” is the touching tale of three boys who use baseball to escape from their unhappy lives. Kinsella is a masterly writer of short fiction. Though his first-person narrators, mostly men much like himself, can become a bit repetitive when the collection is read straight through, each of these works, whether fantastic or realistic, is individually a small marvel of the storyteller’s art.”
?Publishers Weekly, starred review

?We are reading a writer here, a real writer, muses be praised.”
?Los Angeles Times

?This book’s publication should bring readers back to the once very popular Kinsella, now 79, and one hopes it attracts new readers as well.”
?Booklist
?The baseball stories may magically touch on tragic figures such as Roberto Clemente and Thurman Munson, but the tales spend just as much time in the low minors with players who are unlikely ever even to sniff life in Triple A ball, much less the majors. The Indian stories portray the unexpected humor of life on the reservation - humor that is often more of the "sometimes you have to laugh so you don't cry" variety, than not. There are likely to be surprises for everyone in The Essential W.P. Kinsella. But those who know Kinsella's work only from his baseball stories are going to get the biggest and best surprise of all.”
?Book Chase
?Mystery and homegrown magic realism at its best and most satisfying. Kinsella is a storyteller of the first order.”
?Joe R. Lansdale, author of Cold in July
?A retrospective collection of 31 short stories that includes some of [Kinsella’s] finest.”
?Winnipeg Free Press
?He creates a world of rural dusty streets, diners with coffee so strong the pages smell of it and vivid characters who haunt your mind between stories. Kinsella remains one of the game’s best storytellers.”
?Peoria Journal Star
“This collection is a reminder of Kinsella’s strength as a storyteller, his sharp wit and satiric observations, and his characters whom the readers come to recognize as people they’ve known for years.”
—NINE Journal of Baseball
Praise for W. P. Kinsella
?Kinsella defines a world in which magic and reality combine to make us laugh and think about the perceptions we take for granted.”
?New York Times
?Kinsella is a brilliant writer.”
?Edmonton Sun
?...an important literary figure.”
?Detroit News
?Anyone who has read Kinsella (has) been touched on the shoulder by his quirky sense of reality.”
?Boston Herald

Other titles by W.P. Kinsella

Stories from the Breathing Castle

22 Tales from the Outer Limits of Literature

If Wishes Were Horses

The Thrill Of The Grass