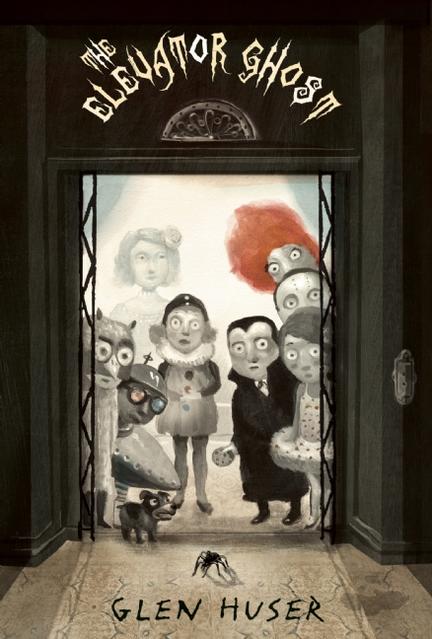 When Carolina Giddle moves into the Blatchford Arms, no one knows what to make of her sequin-sprinkled sneakers and her trinket-crusted car. But the parents are happy there’s a new babysitter around, and Carolina seems to have an uncanny ability to calm the most rambunctious child with her ghostly stories.

Armed with unusual snacks (bone-shaped peppermints, granghoula bars and Rumpelstiltskin sandwiches), candles to set the mood, and her trusty sidekick — a tarantula named Chiquita, Carolina entertains the children with some good old-fashioned storytelling and, at the end, a great Halloween party.

Governor General’s Award winner Glen Huser brings his quirky sense of humor and horror to some time-honored motifs. The artistic Lubinitsky girls find out that artists must be wary of the power of their own creations. Holy terror Angelo Bellini discovers that no one can throw a tantrum like a double-crossed pirate. The Hooper kids, including UFO junkie Benjamin, learn about some eerie goings-on in the New Mexico desert. Timid Hubert and Hetty Croop are practically afraid of their own shadows, until they hear the story of a boy who finds the perfect weapon for overcoming his fear of the dark. And Dwight and Dwayne Fergus, two would-be Freddy Kruegers, finally meet their match in Carolina, and her story of the footless skeleton.

As for Carolina Giddle herself, it turns out that she has a timeworn connection to the Blatchford Arms, and to the ghost who still haunts the building — especially its old-fashioned elevator.

From his earliest years, Glen Huser has loved to write and read and draw and paint. That’s when he wasn’t losing himself in the dark cocoon of a movie theatre or picking out old-time radio standards and Broadway musical hits on the piano. As a teacher and school librarian for a lengthy career in Edmonton, he worked his passions for art and literature into school projects such as Magpie, an in-house quarterly featuring writing and art from students. In his off hours, he wrote movie reviews for a local weekly, children’s book reviews for The Edmonton Journal, and got his small ink landscapes into galleries. As he worked on a degree in Education and then a Masters in English at the U of A, he had the good fortune to work under the tutelage of Rudy Wiebe, Margaret Atwood and W. O. Mitchell. For several years he was a sessional lecturer in children’s literature, information studies and creative writing at the U of A in Edmonton and UBC in Vancouver. His first novel Grace Lake was shortlisted for the 1992 W.H. Smith-Books in Canada First Novel Award. He has written several books for young adult readers including the Governor General’s Award-winner Stitches and the GG finalist Skinnybones and the Wrinkle Queen. Short stories have appeared in a number of literary magazines, most recently Plenitude and Waterloo University’s The New Quarterly. Glen’s current home is Vancouver where he continues to write as well as pursue interests in art and film studies.

For younger readers who are interested in things supernatural or spooky – from skeletons to bat-monsters to extraterrestrials – The Elevator Ghost offers a quirky approach to ghost stories without being overly frightening.

The mix of humor and gentle spookiness make this a perfect classroom readaloud.

The tales are relatively tame and are appropriate for readers new to the genre or those faint of heart.

Other titles by Glen Huser

Time for Flowers Time for Snow

Skinnybones and the Wrinkle Queen

Touch of the Clown

Picture books, a first chapter book, a junior novel, and a collection of Canadian ghost stories all make for spooky reads this Halloween.