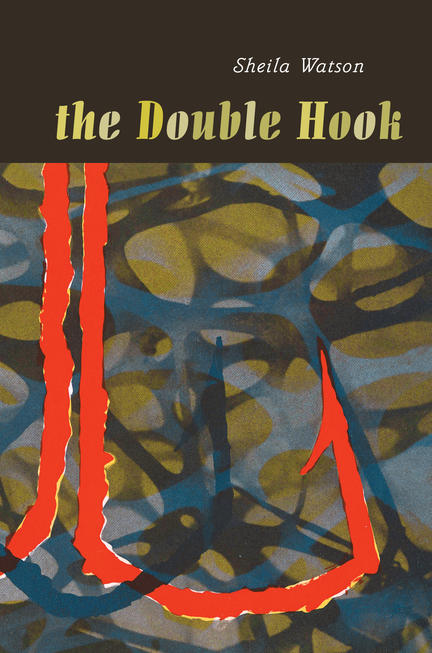 Widely considered one of Canada's first postmodern novels, marking the start of contemporary writing in the country, The Double Hook is now available as a Penguin Modern Classic.

In spare, allusive prose, Sheila Watson charts the destiny of a small, tightly knit community nestled in the BC Interior. Here, among the hills of Cariboo country, men and women are caught upon the double hook of existence, unaware that the flight from danger and the search for glory are both part of the same journey. In Watson's compelling novel, cruelty and kindness, betrayal and faith shape a pattern of enduring significance.

SHEILA WATSON was born in New Westminster, B.C., in 1909. She took her B.A. and M.A. from the University of British Columbia, and then taught in elementary and high schools on the B.C. mainland and on Vancouver Island. In 1961, at the University of Alberta, she was a founder and editor of White Pelican, an avant-garde journal of literature and the visual arts. The Double Hook was her first novel.

1
In the folds of the hills

the old lady, mother of William
of James and of Greta

until one morning in July

Greta was at the stove. Turning hotcakes. Reaching for the coffee beans. Grinding away James’s voice.

James was at the top of the stairs. His hand half-raised. His voice in the rafters.

James walking away. The old lady falling. There under the jaw of the roof. In the vault of the bed loft. Into the shadow of death. Pushed by James’s will. By James’s hand. By James’s words: This is my day. You’ll not fish today.

Still the old lady fished. If the reeds had dried up and the banks folded and crumbled down she would have fished still. If God had come into the valley, come holding out the long finger of salvation, moaning in the darkness, thundering down the gap at the lake head, skimming across the water, drying up the blue signature like blotting-paper, asking where, asking why, defying an answer, she would have thrown her line against the rebuke; she would have caught a piece of mud and looked it over; she would have drawn a line with the barb when the fire of righteousness baked the bottom.

Ara saw her fishing along the creek. Fishing shamelessly with bait. Fishing without a glance towards her daughter-in-law, who was hanging washing on the bushes near the rail fence.

I might as well be dead for all of her, Ara said. Passing her own son’s house and never offering a fry even today when he’s off and gone with the post.

The old lady fished on with a concentrated ferocity as if she were fishing for something she’d never found.

Ara hung William’s drawers on a rail. She had covered the bushes with towels.

Then she looked out from under her shag of bangs at the old lady’s back.

It’s not for fish she fishes, Ara thought. There’s only three of them. They can’t eat all the fish she’d catch.

William would try to explain, but he couldn’t. He only felt, but he always felt he knew. He could give half a dozen reasons for anything. When a woman on his route flagged him down with a coat and asked him to bring back a spool of thread from the town below, he’d explain that thread has a hundred uses. When it comes down to it, he’d say, there’s no telling what thread is for. I knew a woman once, he’d say, who used it to sew up her man after he was throwed on a barbed-wire fence.

Ara could hear the cow mumbling dry grass by the bushes. There was no other sound.

The old lady was rounding the bend of the creek. She was throwing her line into a rock pool. She was fishing upstream to the source. That way she’d come to the bones of the hills and the flats between where the herd cows ranged. They’d turn their tails to her and stretch their hides tight. They’d turn their living flesh from her as she’d turned hers from others.

She raised her chin to unseat the thought. No such thing could happen. The water was drying away. It lay only in the deep pools.

Ara wasn’t sure where water started.

William wouldn’t hesitate: It comes gurgling up from inside the hill over beyond the lake. There’s water over and it falls down. There’s water under and it rushes up. The trouble with water is it never rushes at the right time. The creeks dry up and the grass with them. There are men, he’d say, have seen their whole place fade like a cheap shirt. And there’s no way a man can fold it up and bring it in out of the sun. You can save a cabbage plant or a tomato plant with tents of paper if you’ve got the paper, but there’s no human being living can tent a field and pasture.

I’ve seen cows, he’d say, with lard running off them into the ground. The most unaccountable thing, he’d say, is the way the sun falls. I’ve seen a great cow, he’d say, throw no more shadow for its calf than a lean rabbit.

Ara looked over the fence. There was no one on the road. It lay white across the burnt grass.

Coyote made the land his pastime. He stretched out his paw. He breathed on the grass. His spittle eyed it with prickly pear.

Ara went into the house. She filled the basin at the pump in the kitchen and cooled her feet in the water.

We’ve never had a pump in our house all the years we’ve lived here, she’d heard Greta say. Someday, she’d say, you’ll lift the handle and stand waiting till eternity. James brings water in barrels from the spring. The thing about a barrel is you take it where you take it. There’s something fixed about a pump, fixed and uncertain.

Ara went to the door. She threw the water from the basin into the dust. She watched the water roll in balls on the ground. Roll and divide and spin.

The old lady had disappeared.

Ara put on a straw hat. She tied it with a bootlace under the chin. She wiped the top of the table with her apron which she threw behind a pile of papers in the corner. She went to the fence and leaned against the rails.

If a man lost the road in the land round William Potter’s, he couldn’t find his way by keeping to the creek bottom for the creek flowed this way and that at the land’s whim. The earth fell away in hills and clefts as if it had been dropped carelessly wrinkled on the bare floor of the world.

Even God’s eye could not spy out the men lost here already, Ara thought. He had looked mercifully on the people of Nineveh though they did not know their right hand and their left. But there were not enough people here to attract his attention. The cattle were scrub cattle. The men lay like sift in the cracks of the earth.

Standing against the rails of the fence, she looked out over the yellow grass. The empty road leading from James’s gate went on from William’s past the streaked hills, past the Wagners’, down over the culvert, past Felix Prosper’s.

Other titles by Sheila Watson

In Little Fortress, Rosnau bases her fiction on real-life figures, Italian nobility escaping fascism in the 1930s and finding exile in Vernon, BC. With …