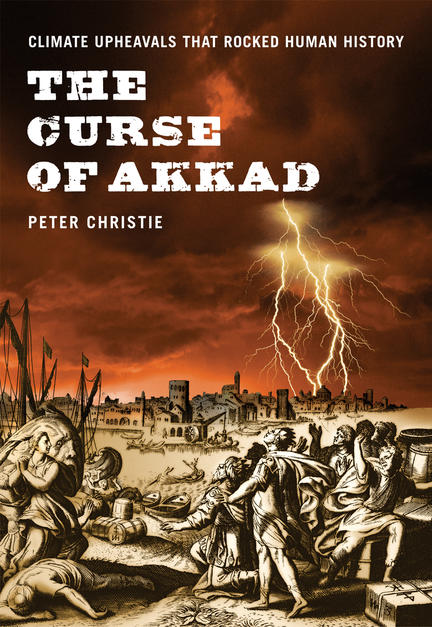 When Sargon of Akkad created the world’s first empire 4,000 years ago, he thought none could conquer his powerful kingdom. He was wrong. A disastrous drought in Mesopotamia helped topple the Akkadian civilization.

Similar climate-related events rocked other civilizations. Ancient Rome experienced a catastrophic 18 months of darkness, possibly from a volcanic eruption half-a-world away. Mayan society in Mexico began to crumble when fresh water became scarce. And both ancient Egypt and ancient China were transformed by failed crops and starving citizens.

While many wonder how today’s warming climate will affect our future, The Curse of Akkad explores capricious climate shifts of the past. From an ice age that gave humans an evolutionary leg up to an El Niño that frustrated the battle plans of Hitler, author Peter Christie shows that the prevailing weather of a place is not simply a backdrop to important events, but often a critical player.

The Curse of Akkad is an acclaimed writer’s exciting and enlightening look at climate’s frequent place at the helm of human history.

Peter Christie is a long-time naturalist and native of Prince Edward County. Before turning his attention to writing, he worked as a researcher for various universities and private foundations, conducting natural history surveys of wildlife in Ontario, Manitoba and Saskatchewan. This work included his participation in a 1979 survey of reptiles and amphibians on which much of this book is based. Most recently, Peter returned to Canada from Tokyo, where he worked as a newspaper editor. His illustrations have appeared in a number of magazines and newspapers in Canada and overseas. Peter considers his ecologist father, the late Jack Christie, to have been his most important guide to the natural world.

“A great read, with lots of interesting sidebars; this one is sure to captivate readers.”—Canadian Teacher, 05/09

“… connecting science to history opens the topic of climate change to a wider range of students.”—School Library Journal, 02/09

“… an attention-grabbing piece of nonfiction that will hit home hard the urgency in reducing our personal contributions to global warming.”—vegbooks.org, 05/25/11

“… this is a model of how to make science appealing.”—Canadian Geographic, 10/08

“Tailor-made for reluctant readers … the subject is compellingly topical.”—Booklist, 08/08

The Curse of Akkad: Climate Upheavals that Rocked Human History

These riveting stories show that climate has often been a leading actor in the drama of human history, a role that will be even more profound in the years to come. Text is illustrated with black-andwhite photos and contains a further reading list, bibliography and index.

Other titles by Peter Christie

Rethinking Our Love of Pets in an Age of Wildlife Extinction

A Blizzard of Blistering Facts

The Wondrous World of Animal Song