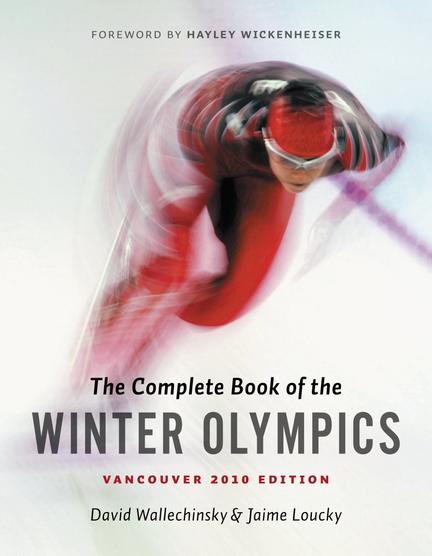 The "Bible of the Winter Olympics," filled with history, statistics, and anecdotes ranging from the astonishing to the bizarre.

Contained within the pages of this authoritative book is everything anyone could wish to know about the Winter Olympics. Now in its eighth edition and published in anticipation of the 2010 Vancouver Games, The Complete Book of the Winter Olympics has been expanded to include the rules and scoring for all the upcoming events, as well as the results from the 2006 Turin Games. The book also looks at the history of each Olympic event from inception to the present day, including discontinued events and the four skating events first featured, before the creation of the Winter Olympics, in the 1908 London Summer Olympics.

From speed skating to snowboarding, bobsled to ice hockey, the book gives the medals tables, timings, distances, and scores. But much more than a statistical compendium, the book also offers an abundance of Winter Olympic history, anecdotes, and lore, bringing alive the most dramatic moments from the Games and celebrating the many extraordinary individuals who have competed.

Jaime Loucky currently lives in Washington, DC, where he works at an international development organization. His first collaboration with his uncle, David Wallechinsky was on The Complete Book of the Winter Olympics: Turin 2006 Edition. The Vancouver 2010 Edition is the third book on the Olympics that they have written together.

David Wallechinsky is renowned Olympics historian, NBC radio commentator and author of several reference books, including the Book of Lists and the People's Almanac Presents the 20th Century. He has been a television and radio commentator for the Olympic Games since 1988. Wallenchinsky is also the vice-president of the International Society of Olympic Historians and recipient of the Olympic Order if the International Olympic Committee.

If the looming Vancouver 2010 Winter Games are driving you to want to know the first time ski jumping, that last male bastion of Olympic winter sports, was held as a contest and you don't want to trust Google or Wikipedia, Wallechinsky will tell you, and you can take his facts to the bank . . . In his Olympics books you find an accurate recording of every sporting event at every Olympics, including the results up to eighth place, with the names, times, nationalities and even judges' scores, where available. —Vancouver Sun

If you are a journalist, a librarian or an Olympics aficionado, you have probably already encountered David Wallechinsky, the master keeper of Olympic facts . . . In his Olympics books you find an accurate recording of every sporting event at every Olympics. —Maple Ridge Times

Nestled in your oversize armchair, giant flat-screen TV at the ready, favourite quaff in hand, you' re all ready for the skirl [sic] and thrum and ballyhoo of the Vancouver Winter Olympics. Or are you? What you need now is point of reference, like The Complete Book of the Winter Olympics: The Vancouver Edition - Winter 2010, by David Wallechinsky & Jamie Loucky. —Globe & Mail

You don't want to trust Google or Wikipedia, Wallechinsky will tell you, and you can take his facts to the bank. —Vancouver Sun

Over the Boards (Signed Edition)

Inside the World's Greatest Sports Event