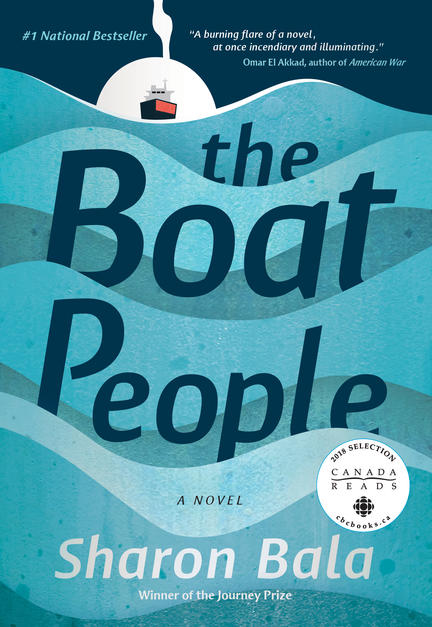 By the winner of The Journey Prize, and inspired by a real incident, The Boat People is a gripping and morally complex novel about a group of refugees who survive a perilous ocean voyage to reach Canada – only to face the threat of deportation and accusations of terrorism in their new land.

When the rusty cargo ship carrying Mahindan and five hundred fellow refugees reaches the shores of British Columbia, the young father is overcome with relief: he and his six-year-old son can finally put Sri Lanka’s bloody civil war behind them and begin new lives. Instead, the group is thrown into prison, with government officials and news headlines speculating that hidden among the “boat people” are members of a terrorist militia. As suspicion swirls and interrogation mounts, Mahindan fears the desperate actions he took to survive and escape Sri Lanka now jeopardize his and his son’s chances for asylum.
Told through the alternating perspectives of Mahindan; his lawyer Priya, who reluctantly represents the migrants; and Grace, a third-generation Japanese-Canadian adjudicator who must decide Mahindan’s fate, The Boat People is a high-stakes novel that offers a deeply compassionate lens through which to view the current refugee crisis. Inspired by real events, with vivid scenes that move between the eerie beauty of northern Sri Lanka and combative refugee hearings in Vancouver, where life and death decisions are made, Sharon Bala’s stunning debut is an unforgettable and necessary story for our times.

SHARON BALA's #1 bestselling debut novel, The Boat People, won the 2019 Harper Lee Prize for Legal Fiction and has been translated into four languages. It was also longlisted for the International Dublin Literary Award and the Aspen Words Literary Prize, and shortlisted for CBC's Canada Reads, the Amazon First Novel Award, the Thomas Raddall Atlantic Fiction Award, and the Margaret and John Savage First Book Award. Her short story "Butter Tea at Starbucks" won the prestigious Writers' Trust McClelland & Stewart Journey Prize in 2017, and she had a second story longlisted and included in the Journey Prize anthology. Sharon lives in St. John's, Newfoundland, where she is a member of the Port Authority writing group.

"The Boat People is a burning flare of a novel, at once incendiary and illuminating. With a rare combination of precision, empathy and insight, Sharon Bala has crafted an unflinching examination of what happens when the fundamental human need for safety collides with the cold calculus of bureaucracy. In the best tradition of fearless literature, it shatters our comfortable illusions about who we really are, reveals just how asymmetrical the privilege of belonging can be. This is a brilliant debut – a story that needs to be told, told beautifully." —Omar El Akkad, author of American War

"The Boat People is a book perfect for our times, essential reading to bring context to questions which we are, perhaps, more inclined to ignore." —Toronto Star
"A novel comprised of both beautiful and uncomfortable truths, written by an author who understands there are multiple sides to every issue – and to every human being." —Globe and Mail

"The Boat People is full of drama and character, sharp bold sentences and movement of all sorts, global and interior. Gorgeous writing, compassionate and urgent." —Lisa Moore

“The Boat People is a powerful, gripping moral drama told with deep compassion and humanity. Sharon Bala takes us behind the headlines about refugees and asylum seekers straight into the beating hearts of unforgettable human beings. A timely tale and a beautiful, remarkable debut.” —Lynne Kutsukake, author of The Translation of Love

“This wise and compassionate novel is an intimate portrait of one of the great humanitarian crises of our time. Its power lies in its breadth, for it examines not just those who come to our country seeking refuge, but also those who determine their fate. As such it implicates us all in the ongoing crisis.” —Shyam Selvadurai, author of The Hungry Ghosts and Funny Boy
“The Boat People is a beautifully crafted story with a big heart. This novel has an urgency and relevance that cuts to the bone and will resonate with readers of all stripes. Bala offers no easy answers and no political posturing, but her magnificent storytelling will leave readers wondering about their own convictions, asking themselves, ‘What would I do? What would I have done?’ The spirits of Bala’s complicated, well-developed characters will linger with you like ghosts; you will look for them in the newspaper, on the evening news, everywhere, and when you encounter them, you will pause and wonder, not only about them but about yourself.” —Michael Stone, author of Border Child

It's an incredible book, with different story lines intersecting and weaving into each other. The first couple of chapters were really hard to read, and many different emotions arose, not always easy ones. In fact, never easy ones. It's a book that inspires digging deep into one's own consciousness, to tackle opinions, thoughts and beliefs. Having gotten through the first chapter, I found myself looking forward to how the story unfolds, what twists and turns it might take, and I found myself surprised quite a few times. Always a good thing. I highly recommend this book.

Canadians on the Dublin 2020 Longlist