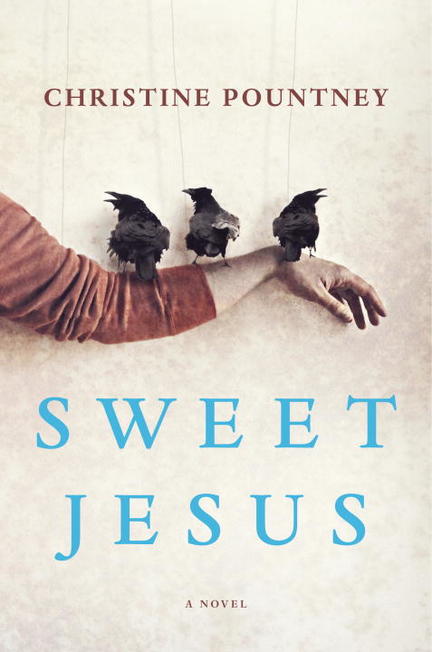 Christine Pountney’s dazzling and original novel, Sweet Jesus, is a work of deep feeling, wit, and piercing observation. Set mainly on Vancouver Island, in Toronto, and in the American Midwest, it tells the story of three siblings who, in the week before the 2012 US Presidential election, reunite and set off on a journey that will transform their lives.
Connie Foster, a mother of three young children, learns that her husband’s attempt to maintain their lifestyle has led them to financial ruin. Her sister, Hannah Crowe, a writer, desperately wants to have a child but the man she loves is determined not to. Zeus Ortega, their much younger adopted brother, who left the family home when he was only fifteen, is living in Chicago with his boyfriend and working as a therapeutic clown in a children’s hospital. Prompted by a heartbreaking loss, he quits his job and decides to search for his birth parents in New Mexico. Together, the three siblings head south and, on the way, they visit a mega church in Wichita, Kansas, where their mother, Rose, once had a powerful faith experience, and where they are confronted by the politics of the evangelical right.
What unfolds is a captivating story about three people bound by family ties and caught between loyalty and desire, searching for wholeness and finding something more real in its place. Achingly human, infused with sparkling intelligence and dark humour, and revealing of our foibles and our grace, Sweet Jesus illuminates how compassion goes a long way in the absence of certainty.  Christine Pountney is one of Canada’s most exciting new writers.

CHRISTINE POUNTNEY grew up in Vancouver and Montreal, and lived in London for five years before moving back to Canada. She has two previous novels, Last Chance Texaco (longlisted for the Orange Prize in 2000), and The Best Way You Know How. She has written for the Guardian, the New York Times Magazine, the Walrus, Brick Magazine, and Nuvo. She lives in Toronto with her partner, Michael Winter, and their son, Leo.

Typical of Pountney's prose style: an impasto of imagery and metaphor that often has an unlikely beauty...the reader continues for the sheer zing of the dialogue and the photo-realist sharpness of the smallest scenes...the smartness and verve of the writing."
—Annabel Lyon, National Post

"She manages to straddle the rift between mainstream appeal and literary sophistication...."
—Edmonton Sun

"Pountney's prose is quietly restrained.... Pountney is a writer to watch."
—Time Out, UK

“Christine Pountney’s prose is stunning, but Sweet Jesus is more than a beautifully written book – it is a guide to being human in an ungodly world.  Her characters are unforgettable.”
—Miriam Toews

“This is a novel about family, faith, and how to be in a world full of yearning. For the blessed clarity of its language, the irresistible momentum of its emotionally riveting story, and the courageous breadth of its sympathies, I fell madly in love with Sweet Jesus.  It is everything I look for in a novel.  It is my book of the year.”
—Barbara Gowdy

Canadians Writing About the US