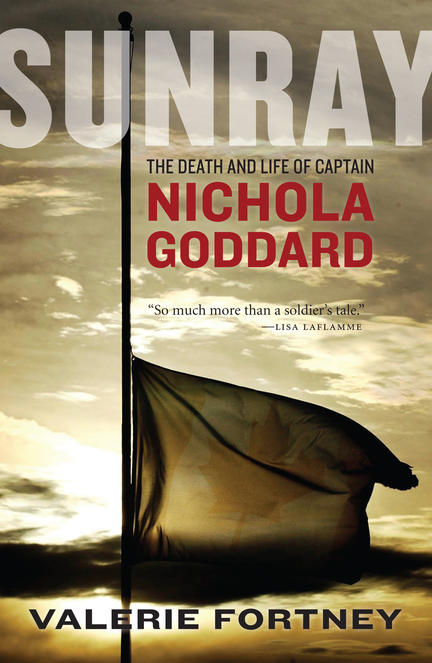 I am sorry that the job that I do takes me away from you. I am sorrier still that sometimes I do stupid things and maybe put myself at risk. More, I wonder at the guys who follow my direction. I wonder about their families. I worry that I will hurt them, or cause my guys to be hurt?. Thank you for believing in me, my love?. I don&rsquo;t think that I could do this without that. Especially when things are hard and the decisions are unpopular. Especially when it is scary. “May 7, 2006

Goddard, say her friends and family, would have hated being singled out for her gender: she was as strong, as capable and as brave as any male in uniform. She was not just a soldier on equal footing with her fellow troops; she was a leader?a &ldquo;sunray,&ldquo; in military parlance?in one of the most dangerous positions in the armed forces, a Forward Observation Officer with the artillery unit.

In Sunray: The Death and Life of Captain Nichola Goddard, award-winning journalist Valerie Fortney examines how a woman raised by self-described &ldquo;left-wing hippies&rdquo; came to find herself fighting?and dying?in Afghanistan. Based on in-depth interviews with Goddard&rsquo;s family, friends, and colleagues, as well as exclusive access to never-before-seen letters, Sunray tells the story of a remarkable 21st-century soldier. It is an intriguing, heartbreaking, and ultimately inspiring look at the decision to serve, and at the costs.

&ldquo;This important biography introduces the remarkable young woman who was a devoted soldier, wife, daughter and friend.... This book is required reading for anyone who questions the Canadian mission in Afghanistan, and not because it provides answers to that question.... Perhaps even more important, it is a fitting tribute to not only Goddard but also to Trooper Karine Blais, the second female Canadian soldier to die, and to the 150 Canadian men lost to the Afghan War as well.&rdquo; - Winnipeg Free Press

&ldquo;On May 17, 2006, Nichola Goddard became the first Canadian woman to die in combat. She&rsquo;s more than just a statistic, however, and Sunray meticulously pieces together her biography-from her gobe-trotting childhood to her tour in Afghanistan- resulting in a thoughtful portrait of a truly modern soldier.&rdquo; - Chatelaine

&ldquo;The detail and research Fortney marshals renders the story universal, and reveals the difficult compromises that military life demands. This is not a book only for military enthusiasts or history buffs; it will reward any reader interested in the drama of a brave, inspiring life.&rdquo; - Quill & Quire

Valerie Fortney is a veteran Canadian journalist with a successful career in broadcasting, magazines and newspapers. She was a regular contributor in the 1990s to the popular radio show Basic Black, and served as a frequent contributor for CBC Newsworld. Valerie’s feature writing has appeared across North America and around the world, in publications such as Chatalaine, The Los Angeles Times and Reader’s Digest International. In the 1990s, she was the founding editor of Avenue magazine, a Calgary magazine named Best New Magazine at the 1997 National Magazine Awards. The magazine won several other regional and national awards during her tenure. She has worked at the Calgary Herald since 1998. Valerie lives in Calgary, Alberta

Other titles by Valerie Fortney

SUNRAY : THE DEATH AND LIFE OF CAPTAIN NICHOLA GODDARD

The Death and Life of Captain Nichola Goddard