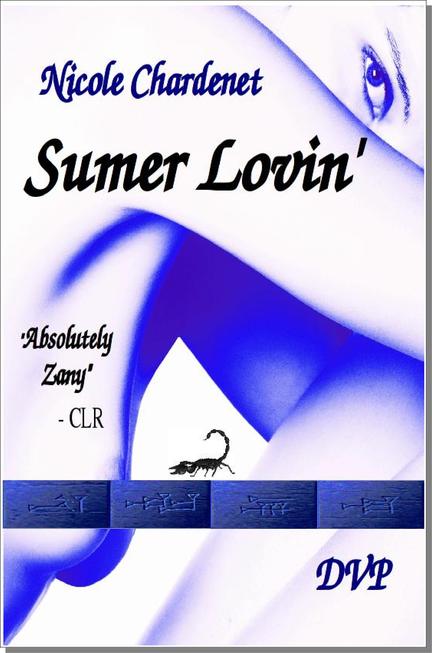 Sumer Lovin' tells the story of Rachel Brinkerhoff, a vivacious New Yorker who dumps her psycho macho husband and immigrates to Canada. Rachel is keen to re-launch her matching business for Jewish singles and find new love, but nobody told her that female-aversive Toronto is definitely BYOB (bring your own boy). Then an earthquake shakes up Canada's metropolis in more ways than one, releasing from an ancient underworld, a male-hungry Sumerian demi-goddess and a rag-tag army of Canaanite warriors. The novel is a brash poke at male-female relations and an artful offering of paranormal adventure and romance.

Ian Thomas Shaw was born in Vancouver, British Columbia. For the last 33 years, he has worked as a diplomat and as an international development worker, living in Africa, the Middle East and Europe. He currently lives in Aylmer, Quebec. He is the founder of Deux Voiliers Publishing, the Prose in the Park Literary Festival and the Ottawa Review of Books. Quill of the Dove is his second novel.

Rachel Brinkerhoff regarded the intense young woman on the other side of the table in the Second Cup booth. Oy, she just knew she'd be a nightmare to work with."So what matches have you got for me?" Alexis asked, leaning forward. Her glossy straight brown hair brushed her shoulders as she watched Rachel from behind her severe rectangular glasses. The brown eyes behind them were striking, but also hard and relentless. What must it be like for some poor young man, squirming beneath that penetrating gaze?"I moved to Toronto a few months ago, so I'm just getting my service up and running," Rachel explained. She deliberately spoke with an unhurried tone, hoping to buy time to think of a good way to handle this. "I'm trying to select a pool of candidates so it'll probably be a few more months before I can start suggesting matches—" Oh, this was good. It would take at least a few months of working with Alexis just to make her presentable for a date.It's not that the 31-year-old wasn't attractive. Alexis was quite lovely, actually. Medium height and fit, with a pretty heart-shaped face. The severe glasses weren't so bad when she smiled - then her penetrating eyes turned friendly and her rich full pink lips invited passionate kisses. The problem was she had a very bad attitude—cynical, jaded, and Rachel just knew she was being treated for depression. Or should be, anyway.Alexis glanced at Rachel's left hand. "So why aren't you married?" she asked. The question was straightforward, like Alexis herself - but the tone less judgemental than when she talked about the men in her past.Rachel sighed and smiled. She hoped her crow's feet didn't show too much. "That's a good question," she said. "I'll admit, I just got divorced. I made a bad choice and the marriage wasn't going anywhere so I got out." Technically true. Austin was never going to change, although one might argue the marriage was going somewhere - in a very ominous direction. "I've learned from my mistakes. I'll choose more wisely next time." Rachel hoped this wouldn't be a deal-killer for Alexis. She felt she could help her, if she was open enough to change."I know how it is," Alexis nodded. "My friends always come to me for advice on how to handle the men in their lives. And I've helped out several of them. It's just not so easy to take your own advice, you know?"Rachel smiled and slid out of the booth. "I'll be in touch," she replied. "I have another appointment in forty-five minutes. Would you know how to get to Yonj and Bloo-er from here?" She dug a wrinkled sticky note from her pocket and squinted."It's Yonge and Bloor," Alexis smiled, pronouncing it Young and Blore. "Are you driving or taking the subway?""I'm driving."Alexis gave her some quick directions and stood up, her glossy hair swinging. "Good luck trying to find men for your database," she said as she headed toward the exit. "You might want to focus on immigrant men. I think you'll find Toronto guys are uninterested in women."

"The best humour from Canada in a decade," Carlos Savanera, Capital Literary Review"Dementedly delightful, delightfully demented, either way this is a gem." Lynn Holtz in Peterboroough“Fast-paced, fun and enjoyable, but also surprising and thought-provoking.” Juliet Swiggum, Toronto"A poignant commentary at what's up with Toronto “men” today. Sure to get a knowing chuckle from all women in Toronto." Lisa Marion, Toronto

Full of edgy humour, Sumer Lovin' is a fantastically funny book. It takes head on the eternal dilemma of finding love in the concrete jungle, and then spices it up with some wacky fantasy inspired by Sumerian legends.

Rachel Brinkerhoff, a striking beauty entering middle age, decides to flee New York and her psycho husband, who has made the fight against terrorists, commies, Muslims, foreigners and every shade darker than snow, his personal crusade. Rachel's refuge? Canada, of course. Restarting life, career and romance in Toronto turns into a daunting task. Rachel soon realizes that Canadian male politeness is often no more than a veneer for sexual indifference. And those men who are "available" seem more attached to their pet gerbils and tarantulas than to her female charms.

An earthquake hits Toronto and opens up portals to an ancient underworld. The first arrival from the past is Lamashtu, a sex-hungry Sumerian demigoddess, whose powers grow with ever male Torontonian virgin she lethally embraces. Lamashtu's entrance is followed by an army of Canaanite warriors, who, confused between CANADA and CANAAN, stake a land claim to downtown Toronto. Rachel is irresistibly drawn to the handsome Canaanite general, and then pulled into a frenetic attempt to save her friend, Dave the Gerbil Guy, from the clutches of Lamashtu.

If you like Woody Allen, Sex in the City and Xena Warrior Princess, you will love Sumer Lovin'. A highly recommended read.

Other titles by Ian Shaw

Quill of the Dove