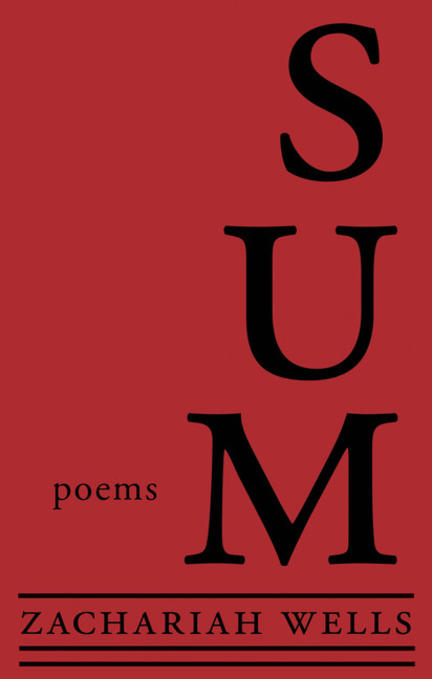 Nimbly slipping between personae, masks, and moods, the prosody-driven poems of Sum weigh the volatility and mutability of the self against the forces of habit, instinct and urge. With homages to Hopkins, Graves, Wislawa Szymborska, Paul Muldoon, and more, and in allusion-dappled, playfully sprung stanzas, this third book from poet and critic Zachariah Wells both wears its influences openly and spins a sound texture all its own, in a collection far greater than its parts.

Zachariah Wells was born on September 10, 1976 in Charlottetown and raised in Hazel Grove, Prince Edward Island. At the age of fifteen he left home to attend high school in Ottawa and has since lived in many parts of Canada (Halifax, Iqaluit, Montreal, Resolute Bay and Vancouver), working as a freelance writer/editor and in various occupations in the transportation sector. Wells received an International Baccalaureate Diploma from Ashbury College and a BA in English from Dalhousie University/University of King's College in 1999. He first started writing poems seriously in 1998. His poems, reviews and essays have been published and anthologized widely. He is the author of three chapbooks (Fool's Errand, Saturday Morning Chapbooks, 2004; Ludicrous Parole, Mercutio Press, 2005; and After the Blizzard, Littlefishcart Press, 2008); two trade poetry collections (Unsettled, Insomniac Press, 2004; and Track & Trace, Biblioasis, 2009) and the children's story Anything But Hank! (Biblioasis, 2008). He is also the editor of the anthology Jailbreaks: 99 Canadian Sonnets. With his wife and son, he lives in Halifax, the only city he likes well enough to have moved to three times, where he works seasonally for Via Rail Canada as an onboard attendant and edits reviews for Canadian Notes & Queries magazine.

Other titles by Zachariah Wells