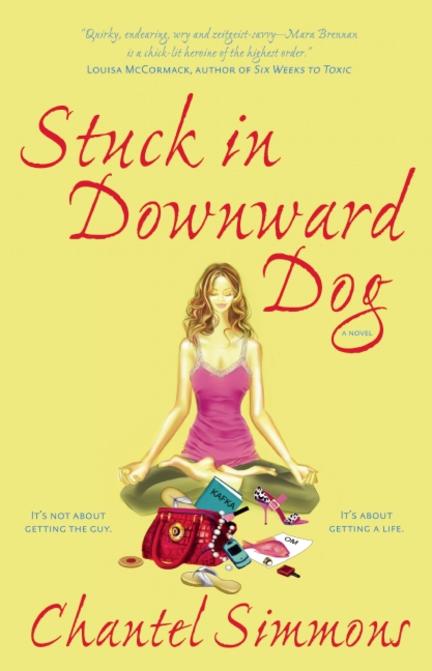 Mara Brennan is about to unravel. Three days after her twenty-eighth birthday, her boyfriend dumps her, leaving her with nothing but a basement apartment, a futon and a pile of unpaid bills. On top of that, her job, working as a receptionist at a cosmetic surgery clinic, is a nightmare: her boss is a tyrant, and her friends have gotten ahead of her in the game of life. Mara realizes it's time for an identity makeover. She devises the OM List, a personal pathway to perfection inspired by her best friends, Olivia and Mitz, and her newfound love for yoga. But instead of finding the perfect job, getting the perfect body and cooking the perfect meal, Mara hilariously tries and fails at all the things she thinks will make her the sophisticated grown-up she wants to be. An unforgettable comic debut about how to get unstuck when you—re caught in a rut.
Praise for Stuck in Downward Dog:
“On par with what real women go through, Stuck in Downward Dog is a been-there, done-that fantastic read that leaves us rooting for Mara and wishing water weight on pretty much everyone else. We laughed, we cried and we even held plank position for thirty seconds longer than normal to show our support.” “Sweetspot.ca
“Simmons inserts an intriguing tweak to the existing chick-lit formula. Instead of setting up a romance as the ultimate goal of the novel, the story instead focuses on Mara's personal achievement in the wake of the wreckage of her relationship... A refreshingly realistic (and, some may argue, feminist) take that women sick of the same old romance-defined shtick will relish.” “Whats on Winnipeg
“Quirky, endearing, wry and zeitgeist-savvy, Mara Brennan is a chick-lit heroine of the highest order. Too bad we couldn—t tell Mara right from the start that her foibles are her strength, and her curvaceousness, her beauty and her zaniness are her great organizing principles. Then again, that wouldn—t have been nearly as much fun. Chantel Simmons is an energetic young author with an admirably shameless sense of fun.” “Louisa McCormack, author of Six Weeks to Toxic

CHANTEL SIMMONS is an author, editor and consumer trends tracker. Her first novel, Stuck in Downward Dog, was a Winnipeg Free Press bestseller, a Chatelaine Best Beach Book and Book of the Month, and a Vancouver Sun Editor’s Choice. Chantel has worked at ELLE Canada, Sweetspot.ca, TV Guide, Elevate and The Toronto Sun, and has contributed to FASHION, Best Health, Reader’s Digest, MoneySense, HGTV, Foodtv.ca and WNetwork.com. She teaches magazine and website writing and editing in the Book & Magazine publishing program at Centennial College, and lives in Toronto with her husband.

Other titles by Chantel Simmons