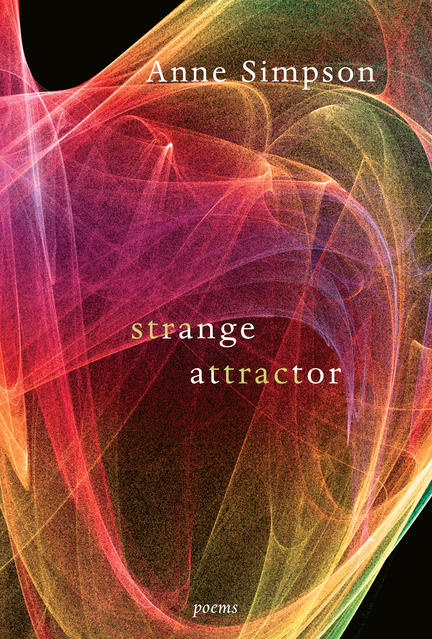 A stunning new work from the Griffin Poetry Prize-winning author of Loop and Is.

All of us are many selves within our lifetimes--one that is thrust upon us at birth, shaped during youth, and reconstructed throughout our lives. Who is this self? Who is this self in relation to others? In the coming-to-be of childhood or in the midst of illness, we face an unknown self within the one that is known. Even after death, we appear as fluid as water in the memories of those who knew us best. Strange Attractor reveals our multiple, shifting selves with power and tenderness, as if Simpson were showing us how to shed our skins.

If you step into this stream now
and return an hour later, everything
will be different. Step into this tea-
steeped water, with a few strands
of grass turned September Blonde.
Between the person you are
to the person you will be after
you step out of this stream,
after you’ve wiped your eyes,
after you’ve had one child, then two,
then maybe three, or none at all,
you’ll look up and find yourself
studying the grand theories
of clouds, one construed as
a woman with her arms outstretched,
another as a burning house. If you
step into this stream, the one
outside the library, not very deep,
with a shopping cart rusting
on its side, you’ll feel it around
your ankles. Step into the stream
when you’re fifteen, lose one
of your running shoes (a red
one), and climb up the bank, damp,
shivering, and you’ll be sixty-three.
Go back down to the stream
to get the shoe and you’ll be
thirty-seven. If you step into this
stream now. If you step into
this stream if you step
if you return if you step. If you
return an hour later you can wrap
dusk around your shoulders. You
might hear someone tinkering
with piano keys, trying to plink
a tune. Let yourself be stream, let
yourself be where it comes from and
where it’s going, let yourself be
nothing but a smear of traffic lights,
glossed ruby, glossed green, on the surface.

Praise for Anne Simpson and Is:

“With the experimentalism of Anne Carson and the imagism of Anne Michaels, Anne Simpson explores the globe of the heart.” —Halifax Chronicle-Herald

“Simpson turns our attention to the sharp edges of life, and she does it with language that juxtaposes beauty with death, creating internal tension in the poems. Simpson looks at death and loss with an unsentimental eye.”—Canadian Literature

Other titles by Anne Simpson