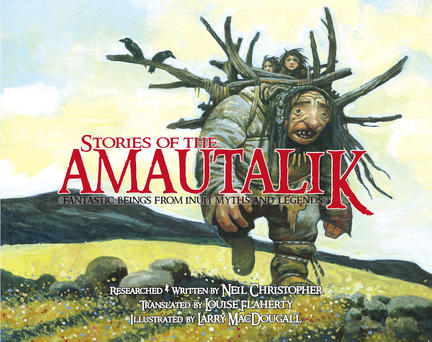 In this colourful, illustrated children's book, the dreaded amautalik haunts two Inuit communities, terrifying five young but resourceful children. With luck, courage, and the knowledge of their ancestors, these young adventurers are able to face one of the most frightening beings to roam the Arctic. Listen well, young ones, for the information in these stories might just save YOU one day!

Neil Christopher is an educator, author, and filmmaker. He first moved to the North many years ago to help start a high school program in Resolute Bay, Nunavut. It was those students who first introduced Neil to the mythical inhabitants from Inuit traditional stories. The time spent in Resolute Bay changed the course of Neil’s life. Since that first experience in the Arctic, Nunavut has been the only place he has been able to call home. Neil has worked with many community members to record and preserve traditional Inuit stories. Together with his colleague, Louise Flaherty, and his brother, Danny Christopher, Neil started a small publishing company in Nunavut called Inhabit Media Inc., and has since been working to promote Northern stories and authors.

Louise Flaherty grew up in Clyde River, Nunavut. Early on, Louise was fortunate to be surrounded by great storytellers. Her grandparents instilled in her a passion for Inuktitut, and an understanding that speaking Inuktitut is a fundamental part of Inuit identity. In 2005, Louise co-founded Inhabit Media Inc., an independent publishing house dedicated to the preservation and promotion of Inuit knowledge and values, and the Inuktitut language. Inhabit Media has since published dozens of books and Inuktitut resources that are used in classrooms throughout Nunavut.

Larry MacDougall is an award-winning illustrator living in Stoney Creek, Ontario. Some of his recent projects include The Secret History of Giants, Eragon’s Guide to Alagaesia, and The Secret History of Hobgoblins. His work has been published in Spectrum Illustration Annuals for science fiction and fantasy art, and he won a Silver Award in Spectrum Annual 15. Larry has always been interested in mythology, faerie tales, and folktales, so turning to Inuit mythology was a natural step for him. He especially enjoys illustrating Inuit myths.

Other titles by Neil Christopher

I can be myself when everyone I know is dead...

Mia and the Monsters Search for Colours

Mia and the Monsters Search for Shapes

The Orphan and the Qallupilluit (English)

Mia and the Monsters: Staying Warm

Mia and the Monsters: The Monsters Learn to Share

Mia and the Monsters: Staying Warm in the Winter (Syllabics/Roman)

Other titles by Louise Flaherty

The Gnawer of Rocks

Things That Keep Us Warm

Other titles by Larry MacDougall

The Shadows that Rush Past

The Dreaded Ogress of the Tundra