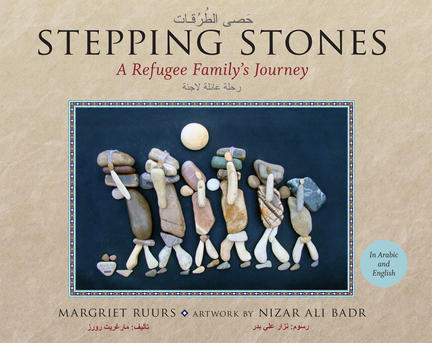 Rama and her family, are forced to flee their once-peaceful village to escape the ravages of the civil war raging ever closer to their home

With only what they can carry on their backs, Rama and her mother, father, grandfather and brother, Sami, set out to walk to freedom in Europe. This unique picture book was inspired by the stone artwork of Syrian artist Nizar Ali Badr, discovered by chance by Canadian children’s writer Margriet Ruurs. The author was immediately impressed by the strong narrative quality of Mr. Badr’s work, and, using many of Mr. Badr’s already-created pieces, she set out to create a story about the Syrian refugee crisis.

Orca Book Publishers is pleased to offer this book as a dual-language (English and Arabic) edition.

Margriet Ruurs is the award-winning author of forty books for children. Passionate about literacy, she writes children's and educational materials and conducts author visits and writing workshops at international schools around the world. Her picture book biography A Brush Full of Colour: The World of Ted Harrison won the Canadian Children’s Literature Roundtables Information Book Award and the Crystal Kite Award, and was nominated for several others. Born in the Netherlands, Margriet raised her family in the Yukon, Canada. Today, when she isn't travelling, she runs a booklover's bed and breakfast on Salt Spring Island in British Columbia.

Nizar Ali Badr has always been inspired to paint, sculpt and draw. In his walks along the seashore near the ancient port city of Ugarit, Syria, he always admired the stones on the beach and in the clear blue water. Now he gathers these stones and brings them home to his rooftop studio, where they become the medium for his art. Nizar has never left his hometown of Latakia, though in his heart he accompanies the many Syrians who have been forced to flee their homeland because of ongoing violence.

Falah Raheem is a Canadian/Iraqi translator and writer. He has published the translation of about twenty books from English to Arabic by writers like Dylan Thomas, Jean Rhys and Julian Green, and critics like Paul Ricoeur, Judith Butler and Samuel Haynes. His first novel “The Parable of the Hedgehogs” was published in Arabic in 2012. He lives in Victoria, British Columbia and was pleased to work as the translator on the Stepping Stones project.

"Ordinary beach stones were used to make the three-dimensional collages in this arresting picture book...Stone by stone, step by step, it all adds up to a memorable look at what it means to leave one's home in search of 'a bright new future.'"

"Brilliant and beautiful and inspiring. A book that should be read with every child in the world! An instant classic as solid as the stones on which it is based!"

Eric Walters, award-winning author and member of the Order of Canada

"It's exquisite! One can only pray that its message will spread and make the difference we need."

"The book is beautifully written in two languages: English and Arabic. Its English prose is straightforward, piercing, and lyrical. The Arabic is no less deft and poetic. It stands on its own and not simply as a translation of English. For example, the translator's Arabic choices for 'juicy' and 'sunbaked' are inspired...'It tells me what people's lives were like in Syria.' For this reason and many others, it is a book worth reading. Its story, in two languages, is beautiful. Its artwork is original and touching. And most importantly, it teaches us empathy and compassion for humans often dehumanized, who live and love the way we too would like to live and love."

"Readers of all ages will find things of value within the pages of the book...The photographed stone arrangements seem oftentimes to pulse with more life than one might think possible. Whether consciously or otherwise, given his media Badr has create figures that suggest the unbreakable spirit of people seeking freedom and opportunity...This rare treasure of a book is likely to remain highly sought-after for some considerable time...Highly recommended."

"What a wonderful book!…The illustrations are amazing, created totally from stones…They poignantly display the plight of this family as they leave all they have known behind to seek a new life…This book would be a wonderful way to introduce young children to the refugee crisis that is happening in other parts of the world. Especially now when we have some of these refugee children in our own classrooms throughout the country, the book might inspire some of these children to share their experiences. I would highly recommend this book for every primary and elementary school in the country."

"Ruurs' beautiful words are twinned with the most stunning artwork by Nizar Ali Badr...I could not but be moved by Badr's work, as it is unlike anything else I have ever seen and conveys so much emotion. I hope this beautiful book will reach the shelves of classrooms, libraries and homes throughout the world and be read and shared many times over."

"Ruurs' sensitive text focuses on the beauty of everyday aspects of Rama's life before the war and gently recounts the mounting problems that cause the family to leave...A book that reflects not just the experiences of Syrian refugees, but one that is a beautiful and timeless reminder of resilience in the face of war as love and caring prevail."

"The lyrical phrasing of Margriet's free verse narrative captures the eloquence and simplicity of young Rama's reactions to her experiences...Badr instills life into his stone-art with seemingly simple shifts in background, angles, and minute adjustments of one stone in relation to another."

"This picture book is special, in many ways. Firstly, the verbal text is well worked and beautifully written. It is compassionate and warm. The English is accompanied by Arabic, making this a dual language text, sought after in public libraries. The illustrations are amazingly authentic...The pictures emanate expression and feeling, astounding from such inanimate objects as stones...the world is a lot better for it. This book, although initially intended for children, is for a global, all ages audience. It is a must for public library and more suitable for school libraries. "

"Stunning, original artwork both childlike and sophisticated; a text that will both break and mend your heart."

"[An] excellent book that will help young readers understand what is happening to the children they see on TV. I can't recommend [Stepping Stones] highly enough."

A gateway to discussing refugees and immigration with America's youngest citizens...Teaching kids empathy—this is where it starts.

"This is an amazing book!! Every teacher should own one."

"Readers will be fascinated by the stone-collage illustrations created by Syrian artist Badr, who arranges expressive tableaux of people formed entirely of rocks and pebbles...A unique offering that will open eyes and soften hearts."

★ "Ruurs writes purely and warmly, with the text set in both English and Raheem's Arabic translation...She deftly conveys the happiness of peaceful childhood, then the confusion and the fears born of war and migration, and the relief and curiosity of arriving at a new home...Each illustration is masterful, with Badr's placement of stones as careful as brush strokes, creating figures positioned to tell the whole story without the benefit of facial expressions...An astonishing book that allows the humanity of refugees to speak louder than politics and introduces readers to one of Syria's incredible artists."

Other titles by Margriet Ruurs

Mapping Neighborhoods of Kids Around the Globe

A Brush Full of Colour

The World of Ted Harrison

Come, Read With Me

Ghost of the Mill House

Bus to the Badlands

Caring for Orphaned Elephants in Zambia

Birthdays Around the World

Other titles by Nizar Ali Badr

Other titles by Falah Raheem