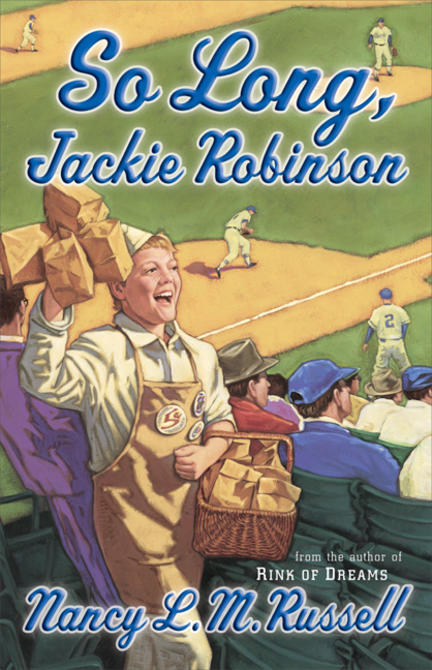 It's the summer of 1946 in Montreal, Quebec, and twelve-year-old Matthew Parker would rather be anywhere else in the world. Or at least back in Pembroke, Ontario. That's where Matthew used to live?before his mother remarried and moved him away from his family, his friends and worst of all, his baseball team.
Now, everything's a mess. He can't speak the language, he has no friends, and everyone he meets is obsessed with hockey! But just when things look about as bleak as they can look, the crack of a bat changes everything. On average day, during an average walk through his neighbourhood, Matt stumbles across Delorimier Downs. Delorimier is home to baseball's Montreal Royals, and the team's star player is none of other than Jackie Robinson!
When Matt lands a job selling concessions in the stands, he finds himself with a front-row seat for all the excitement and controversy that follow Robinson as he strives to become the first African-American player to suit up in the majors. Along with new friends Rene and Guy, Matt meets Tyrone, an old ball player with a mysterious connection to Jackie. And then there's Dewey?a cub reporter who's trying to make a name for himself by telling Robinson's story.
Montreal, it turns out, is the perfect place to be in the summer of 1946. But will Matt realize that in time?

NANCY RUSSELL is a broadcast journalist with more than sixteen years of experience with CBC Radio and Television. She is the award-winning author of several young adult books, including Rink of Dreams, which was short-listed for the Manitoba Young Readers` Choice Award, Light the Way Home, One Magical Summer, and Farewell to Ferryboats. Russell lives in Stratford, PEI, with her family.

It’s the summer of 1946 in Montreal. Matthew would rather be anywhere else in the world until he stumbles upon Delorimier Downs, home of the Montreal Royals and their star second baseman, Jackie Robinson.

Other titles by Nancy Russell

Other titles by Nancy L. Russell