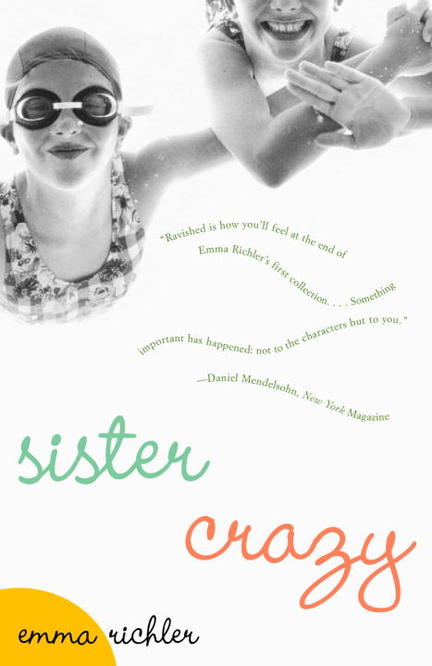 Jemima Weiss grew up with a special feeling for British commandos, American westerns, the Knights of the Round Table, bagels with cheddar on top, and, above all else, her family. Now grown into a worldly yet deeply troubled woman, Jem revisits her formative years, even as she struggles not to let herself be engulfed by the present. In a voice crackling with humour and shot with straight talk, she recounts a childhood in a family so extraordinary that it has left her adrift in the adult world.

In seven episodes that elide to form a dense, rich impression of an unforgettable family, Jem candidly relates her mythological view of her parents – her gruff Jewish father, whom she saw as a gunslinging cowboy, and her prophetic, beautiful mother who, like a “good witch,” always knew what her children were thinking and feeling. Then there are her four siblings, chief among them a charismatic, adventurous brother who has remained Jem’s main object of affection, and her ethereal little sister, Harriet, who becomes a surprising source of comfort in Jem’s adult life.

Emma Richler grew up in London, England, and in Montreal. She trained as an actress at the Circle in the Square in New York City and has worked in the UK in theatre, film, television drama, and on BBC radio. She lives in London.

"We are not going to any other shops. Just the chemist. I'll stay in the car. You have ten minutes." I start singing in my head, the tune from the Sturges film Gunfight at the O.K. Corral. O-KAAAY...co — RAAL! O-KAAAY...co — RAAAAL! I almost sing it aloud. I want to, because it might make my Dad laugh but I worry that for once it won't; that he won't join in and I'll feel bad, worse than I do already. The song rises, then dies in my chest and I miss my chance and that's the hell of this thing, this sissy, crackpot, sneaky disease which is not ok, like consumption with its angry show-off blood on wads of linen.

"Did you hear what I said?"

I can see Dad's eyes looking at me in the rearview mirror. He has wild brows and his eyes are narrowed, weather-beaten lines running from the corners toward his temples. He is a handsome man, in an unruly way, and he has a gunslinger's gaze. This comes from years of squinting into a high sun and into duststorms and sharp night winds. It comes from a perpetual state of wariness and the need to see around things and be ready at all times. Anything can happen but you must stay cool. You have to master the distant look and know how to forage the horizon for looming dangers such as wild beasts, Apaches, and other gunslingers with sharp, squinty vision who might be on your trail.

When my Dad talks to me, the little muscles around his eyes bunch up, giving him that gunslinger look. I have the distinct sensation he is not having a good time having to make words, having to speak at all. It's the way he is and you have to get used to it. His vision is acute; he is the only one in the family who doesn't need glasses.

"We are not going to any other shops — just the chemist."

"Right." My Dad looks at the road now.

I practice a gunslinger squint. I can see my reflection in the window, which I keep closed due to air conditioning, and my face is dappled with tree leaves and other passing things, but I can see my eyes. I look silly, because a gunfighter cannot wear glasses and look cool. A good cowboy does not wear specs.

"The tone is confiding, the form original in its meandering ('nothing is separate but works in a chain-like way'), and I was charmed and impressed. Then I began to wish for more."
—The Observer Sunday September 30, 2001
"Sister Crazy… is carried by a voice so unerring and sure that readers will find very little suspension of disbelief is required… There’s no plot here, per se; the structure is that of memory, and the first person narrative, at times richly poetic, meanders as memory does, between Jem’s childhood, her lucid remembrance of that childhood, and a pale mysterious adult present, less real to us because it is less real to her.”
—Darcy Cosper, Bookforum

“Emma Richler ricochets from the humorous to the sad in this engaging and satisfying first novel.”…yet another Richler has writing talent and huge potential.”
—The Edmonton Journal

“Emma Richler’s characters may be familiar but her point of view is fresh and funny, smart and startling. She may be her father’s daughter (and that’s no bad thing) but Emma Richler is definitely and defiantly an acomplished writer in her own right.”
—BOOKS in Canada
“Sister Crazy is not a conventional “book.” It’s word-photos, freeze-frames. Each with a story. Each story told in a unique voice. Whatever this word-accretion is, it went straight to my soul and will not leave.”
—Gale Zoe Garnet, The Globe and Mail

“Sister Crazy, with its easy prose, piercing insights and sly wit, is actually a rather fine debut…Sister Crazy's depiction of a golden childhood is enlivened by amusing meditations on all sorts of things — French films and malt whisky, commandos and cowboys, St. Francis of Assisi and the Knights of the Round Table. But the brief glimpses of Jemima as a tormented adult sting like thorns from a rose bush.”
—National Post

“Emma Richler’s first book is a fantastically vivid characterization of childhood shot through with random holes from a rear-facing cannon of adult depression. You want to throw your arms around Jemima—to adore the true-hearted child, to protect the vulnerable adult.”
—Elaine Evans, National Post

“Richler’s … authorial voice [is] at once entertaining and serious, almost philosophical at times…. She draws her somewhat eccentric parents and four siblings with enviable confidence and insight. Their delightful quirkiness carries over into Richler’s own style, which includes introducing such wide-ranging elements as the Knights of the Round Table, Ebenezer Scrooge, action figures and astronomy into the narrative. She juggles and weaves her seemingly disparate topics with ease…. Richler’s writing is superb: crisp and sure, sometimes surprisingly poetic, often infused with a sly humour…. Richler … abandoned an acting career to write this book. Her choice was no mistake.” —The Toronto Star

“Extraordinary…. The narrative voice is, by turns, grave, funny, mytho-spiritual, ironic, poetic and wary…. [Emma Richler’s prose] is gulping, thrusting, almost punctuationless…. Sister Crazy is not a conventional ‘book.’ It’s word-photos, freeze frames. Each with a story. Each story told in a full and unique voice. Whatever this word accretion is, it went straight to my soul and will not leave.”
—The Globe and Mail

“The stories in Sister Crazy resemble dramatic monologues; they aren’t linear narratives. Instead Jemima prefers to start with a single fact or recollection and bounce around from it, exploring connected ideas, leaping between episodes and across time, from herself as a child to herself as an adult.… The power of a moment is reinforced by the way it echoes back along the chain of associations we have patiently followed…. The books comes most alive at those moments when a blast of anger toward the father pierces the false nonchalance of the narrator’s voice.”
—Marcel Theroux, The New York Times

“Richler at her best balances on a knife-edge between humour and sadness.”
—Maclean’ s

“Richler's prose is honest, vulnerable and engaging.”
—The Gazette (Montreal)

Other titles by Emma Richler