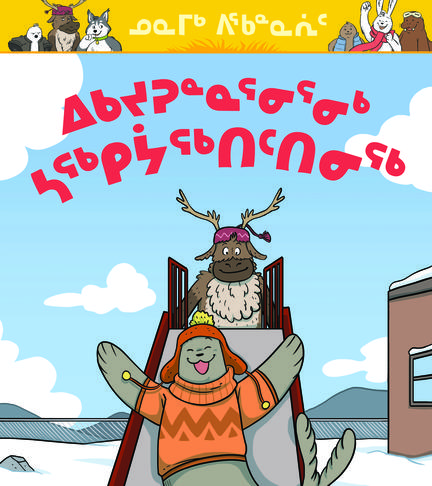 Tuka likes to help his friends, but he does not always like hugs. Natti loves hugs!

Tuka wants to let Natti know how her hugs make him feel, but he doesn't want to hurt her feelings. Will Tuka be able to help Natti find other ways to show she cares?

Aviaq Johnston is a young Inuk author from Igloolik, Nunavut. Her debut novel Those Who Run in the Sky was shortlisted for the 2017 Governor General's Literary Award for Young People's Literature, was a finalist for the Foreword INDIES Award for Young Adult Fiction, and a 2017 Honour Book for the Burt Award for First Nations, Inuit and Métis Young Adult Literature. In 2018 she won the inaugural Indigenous Voices Award for Most Significant Work of Prose in English by an Emerging Indigenous Writer. She is also the author of the bestselling picture book, What's My Superpower? Aviaq loves to travel and has lived in Australia and Vietnam. She spends most of her time reading, writing, studying, and procrastinating. She divides her time between Iqaluit, Nunavut, and Ottawa, Ontario.

Amanda Sandland is an illustrator living in the Toronto area. She studied illustration at Seneca College, eventually specializing in comic arts and character design. When not drawing, she can be found studying, designing characters, creating costumes and replica props, or burying her nose in a comic. She is the illustrator of Ukaliq and Kalla Go Fishing and The Owl and the Lemming.

Other titles by Aviaq Johnston

Why Is She Mad at Me?

TJ and the Sleepover

Those Who Dwell Below

Other titles by Amanda Sandland

Taqu and the Special Carving

Joannie and the Nunavut Forest (Inuktitut)