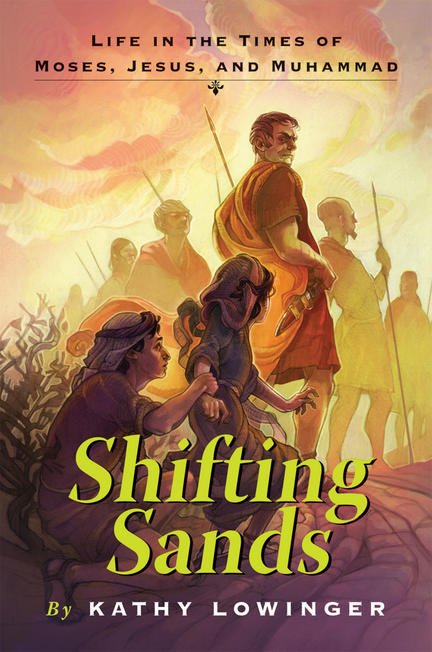 The stories of three young people who experience the tumult—in three eras—as new religions are about to be born.

Dina is a slave, a weaver for the royalty of Ancient Egypt. Summoned to the royal chamber, Dina learns she will move south with the Queen and the Pharaoh to a bountiful oasis, but far away from her family and her Jewish faith. When Moses, a Hebrew who has deied the Egyptians, comes to visit, Dina must make a choice between the predictable life of a slave, or an uncertain one that promises more by following Moses into the desert.

Fifteen hundred years later, Rome’s oppressive rule has impoverished young Mattan’s family. He sets out from his home in Nazareth to make his own way, joining forces with an old trickster, to eke out a living performing around Galilee. When they come upon a man preaching in Capernaum, their lives change forever as they become followers of Jesus.

Around 622 A.D. Fallah, a Bedouin boy, fees from his desert home to break out of the grip of the blood feud that killed his father. Though he becomes a successful poet in the marketplace of Mecca, he and his brother are condemned to live forever as outsiders in a society dominated by a powerful tribe. Muhammad and his Companions offer them a different future—if they are brave enough to grasp it.

Drawing on both the historical and the imagined, Shifting Sands brings the past to vivid life. These stories expertly recreate how life might have been for young people living in the time of three of the world’s most important igures. Informative sidebars and full-color illustrations add historical favor.

KATHY LOWINGER is an award-winning author whose books include Give Me Wings! How a Choir of Former Slaves Took on the World (2015), Turtle Island: The Story of North America’s First People (2017), and What the Eagle Sees: Indigenous Stories of Rebellion and Renewal (2019).

Other titles by Kathy Lowinger

The Gift of Indigenous Knowledge

What the Eagle Sees

Indigenous Stories of Rebellion and Renewal

How a Choir of Slaves Took on the World