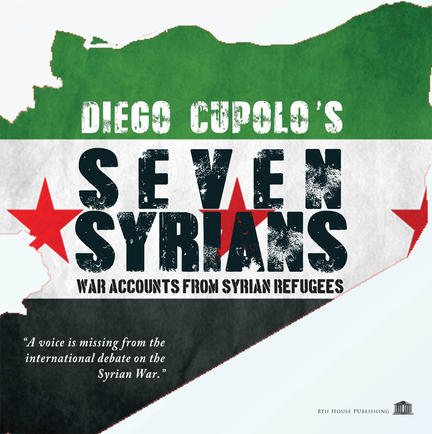 "Seven Syrians" captures the stories and struggles of those caught in the middle of the armed conflict currently ravaging Syria. Framed by Diego Cupolo's unerring eye while touring the region, these photographs and first-hand accounts remind us that it is civilians who suffer the brunt of war's atrocities. In a series of humanizing portraits, Diego Cupolo takes us into the lives of those fortunate enough to have survived the conflict decimating their homeland. Forced to flee their homes and families, these men, women and children, teachers, plumbers, engineers, taxi drivers, brothers and sisters no different than ourselves and our neighbours, tell us in their own words of their struggles, triumphs, pains and fortitude and of the monstrosity of war when all of us the world over, seek the same security and opportunities for our children. Read and listen.

(*$2 of your purchase will go directly to the "A HEART FOR SYRIA" a charity organization supplying humanitarian aid to Syrians displaced by the ongoing war. At least twice a month, a container-load of clothing, blankets and medical supplies leave the port of Montreal to help civilians inside Syria. Find out more and how you can help at aHeartforSyria.org

Diego Cupolo began his journalism and photography careers in New York City and has continued his work while residing in Montreal, Quebec and Buenos Aires, Argentina.
Today, he serves as Latin America regional editor for Global South Development Magazine and works on the road as an independent journalist, having reported on Syria, Turkey, Bulgaria, Nicaragua, Peru and Chile. His written and visual work has appeared in The New Yorker, The Atlantic, The Associated Press, The Village Voice, The Australian Times, Discover Magazine, The Argentina Independent and Diagonal Periódico.