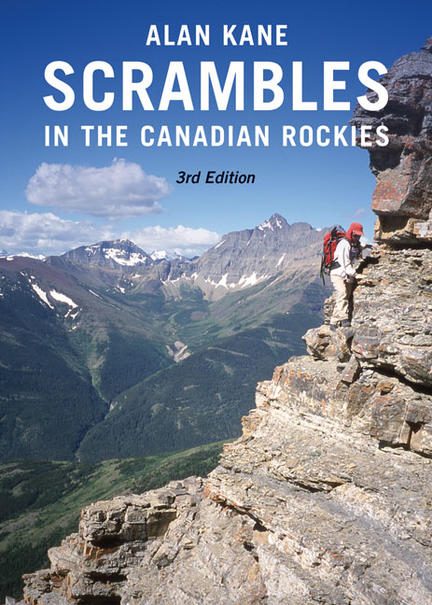 Having sold more than 40,000 copies of previous editions, this authoritative climbing guide has been completely revised, updated and redesigned for a whole new generation of mountaineers.

Armed with first-hand information, Alan Kane describes over 175 scrambles in a clear, concise format. This includes equipment needed, when to go, how to get there, where to park and what to expect as you work your way to the summit. Photos showing the ascent line complement descriptions that include historical trivia, origins of placenames and summit views. Routes range from off-trail hiking suitable for strong hikers to challenging routes at the low end of technical climbing where use of specific handholds is required on steep, airy terrain. Most ascents are day trips from a major road; many utilize a hiking trail on approach and include some of the most-photographed Rockies postcard peaks. The scramble areas begin in Waterton Park near the US border and continue north through Crowsnest, Kananaskis, Canmore and into the contiguous mountain parks of Banff, Yoho, Kootenay and Jasper. An overview of facilities, accommodation and climate is provided for each area. Specific hazards from rock quality to wildlife encounters are mentioned, including advice on scrambling safely. Guidebooks can be dry reading, but Kane’s snippets of humour make the book entertaining as well as useful.

Alan Kane was born in Banff, Alberta, and grew up in Golden, British Columbia. In 1991 RMB published his original Scrambles guidebook, which to this day is almost solely responsible for the widespread popularity of non-technical mountain ascents, or scrambles, out West. When he isn’t hiking or scrambling, Alan may be found wandering along streams pursuing his other passion, fly-fishing. Alan is married to his very tolerant wife, Diana, and lives in Calgary, Alberta.

Other titles by Alan Kane

Scrambles in the Canadian Rockies