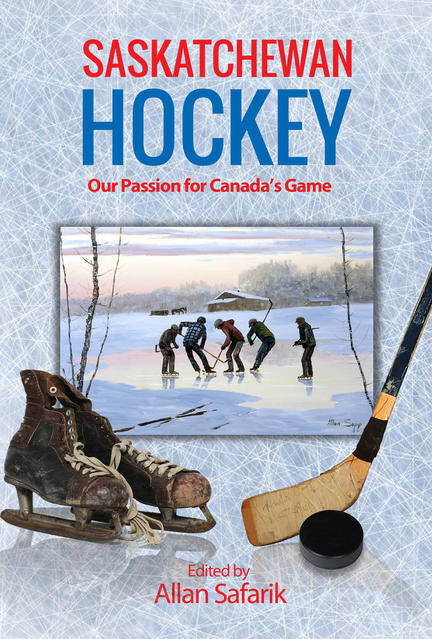 Saskatchewan produces more NHL players per capita than any other place in the world. From dugout and pond hockey on farms in rural Saskatchewan to hockey in First Nations communities, small town rinks and urban arenas, this collection from some of Saskatchewan's best writers illustrates the Prairie passion and devotion to the game called hockey.

Allan Safarik was born in Vancouver and raised in a commercial fishing family on Vancouver Heights in North Burnaby where he spent much of his childhood exploring the waterfront when he wasn't playing soccer in East End parks. He is the author of fourteen books of poetry, is an editor and was a co-founder of Blackfish Press in British Columbia. In 1986, he edited the award winning anthology Vancouver Poetry. Safarik, a long time resident of White Rock, BC, currently resides in Dundurn, Saskatchewan and teaches Imaginative Writing at St. Peter's College in Muenster. Safarik won the 2003 John V. Hicks Manuscript Award for Literary Non-Fiction and the Saskatchewan Book Award for Poetry (in the name of Anne Szumigalski) for When Light Falls from the Sun Hagios Press. He has a B.A. in English from Simon Fraser University. His recent books include Yellowgrass (Hagios, 2008) and The Day is a Cold Grey Stone (Hagios 2010).

Other titles by Allan Safarik

A Lifetime in the BC Fisheries from Bounty to Plunder

When Light Falls from the Sun

How I know the Sky is a River

Quotations On the Jays

The Little Blue Book That Could

Quotations On The Great One

The Little Book of Wayne Gretzky