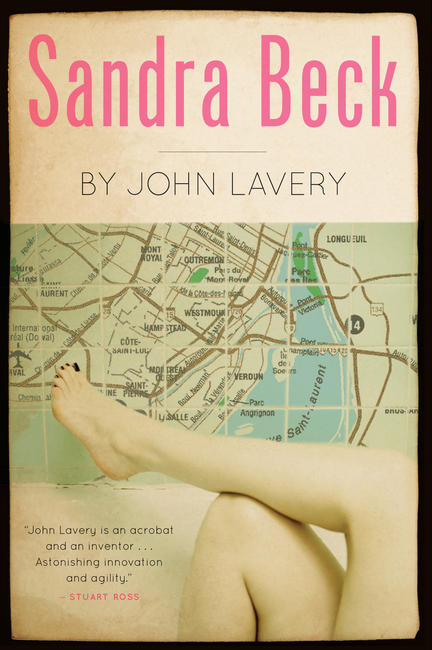 No writer in Canada today is more in love with the English, and French, languages than John Lavery. That love is gloriously requited. In inventive, incantatory prose, Sandra Beck, his long-awaited first novel, paints a very unusual portrait of a lady. This is a book about many things: the struggling antics of adolescence, the banal delusions of solitude, the city of Montreal. But it is, above all, a deeply moving tribute to a woman who is both present and absent on every page.

Who is Sandra Beck? She is a mother, a wife, a musician, a manager; but, too, she is the ghost in the seat behind us, always just outside the edges of easy description. Her story is told in the voices of others - namely, her daughter, the wordstruck and lovestruck Josee and her husband, the police chief and TV personality P. F. Bastarache. In a book that embraces paradox and defies the expected limits of what a novel can do, language is at once a gleeful celebration and a crutch, a trick. Despite their keen investigative powers, the "testimony" of Josee and her father is often untrustworthy, even contradictory: self-interest hobbles their understanding. Sandra herself becomes a crutch for them both - a crutch they must learn to live without.

John Lavery (1949–2011) was a Canadian fiction writer of national reputation, known for his innovative and playful prose style. In addition to publishing his debut novel, Sandra Beck, with House of Anansi at the age of sixty-one, he was the author of two acclaimed story collections, You, Kwaznievski, You Piss Me Off, and Very Good Butter (a finalist for the Hugh MacLennan Prize for Fiction). An accomplished lyricist and a founding member of the Societé de guitar de Montréal, he recorded his first album, Dignity, shortly before his death in May, 2011.

Sandra Beck is a novel that emerges from the particular language and geography of a specific place, and the enormous talent and skill of a gifted author. It is a pleasure and a marvel.

Most of the time Sandra Beck feels like music. Lavery swings us along with the master’s sure touch and it is always a pleasure to swing right along with him...every page of Sandra Beck is a delightful surprise.

You’ll read John Lavery for the wildly energetic prose and for his surprising grasp of imagery. You’ll turn the pages to delight in the language...There’s something for just about everybody in Sandra Beck.

Few novels today dare to disrupt our ideas of what narrative can and should do. Fewer still do it as expertly this one does.

Other titles by John Lavery

You, Kwaznievski, You Piss Me Off

eBooks from Quebec and the North