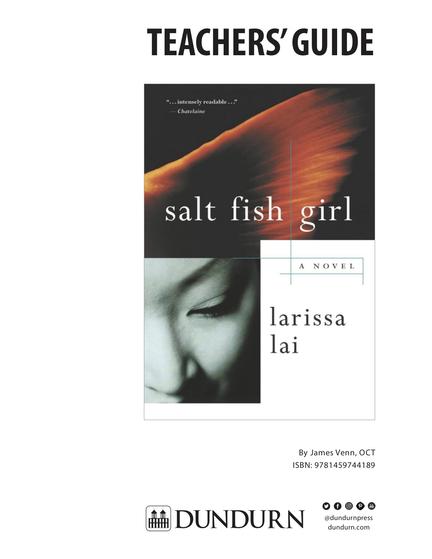 Salt Fish Girl is the mesmerizing tale of an ageless female character who shifts shape and form through time and place. Told in the beguiling voice of a narrator who is fish, snake, girl, and woman - all of whom must struggle against adversity for survival - the novel is set alternately in nineteenth-century China and in a futuristic Pacific Northwest.

At turns whimsical and wry, Salt Fish Girl intertwines the story of Nu Wa, the shape-shifter, and that of Miranda, a troubled young girl living in the walled city of Serendipity circa 2044. Miranda is haunted by traces of her mother’s glamourous cabaret career, the strange smell of durian fruit that lingers about her, and odd tokens reminiscient of Nu Wa. Could Miranda be infected by the Dreaming Disease that makes the past leak into the present?

Framed by a playful sense of magical realism, Salt Fish Girl reveals a futuristic Pacific Northwest where corporations govern cities, factory workers are cybernetically engineered, middle-class labour is a video game, and those who haven’t sold out to commerce and other ills must fight the evil powers intent on controlling everything. Rich with ancient Chinese mythology and cultural lore, this remarkable novel is about gender, love, honour, intrigue, and fighting against oppression.

She sweeps our imagination with the flick of a fox's tail, the gleam of an eye.

Lai has an excellent command of structure making the complex storytelling seem effortless, and the book is full of startling insights into dysfunctional human behaviour.

A remarkable debut. It is a magical book.

Other titles by James Venn

Everton Miles Is Stranger Than Me Teachers' Guide