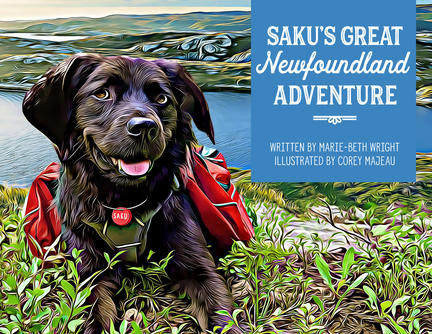 Believe in yourself and you will be unstoppable. At times while crossing Newfoundland I felt like giving up, especially after some close calls. But in life you can either lose faith or keep believing that you will make it, no matter what. Dig deep, work hard, and stay safe in your adventures! — Justin Barbour

Saku, a young Cape Shore water dog, is skilled and strong with a lot of exploring to do. Watching him bound around the backcountry or swim behind Justin Barbour’s raft, you just know that he is ready to go on a long adventure! Together with Justin, Saku is going to cross from Robinsons in western Newfoundland to Cape Broyle, where the province’s eastern shores meet the Atlantic Ocean. Using a satellite phone, they inform everyone back home how they are doing as the months speed by.

What will Saku and Justin find as they travel 700 kilometres through thick woods, across icy lakes, on wild rivers, and catch trout for fresh food? Following in Saku and Justin’s footsteps, young readers will learn how to start a campfire, make a warm bed of boughs for chilly nights, and live as friends with nature.

After a snowy start, the two pals soon travel faster and make new friends as they emerge from the wilderness in the little towns of St. Alban’s and Conne River. Excited children, townspeople, and Chief Mi’sel Joe and his family all welcome them warmly. Saku’s pack is soon filled with new kibble, and the pair continue eastward. Even Bear, Saku’s doggy friend who remains at home, can hear Saku’s excited bark when Justin calls home on his phone! Finally, as they near Cape Broyle, Saku and Justin can hardly believe the welcoming party gathered near the beach.

A cheer goes up! They are home again with many adventures to share with their friends!

Marie-Beth Wright was born in Valleyfield, Bonavista Bay, and attended Memorial University, graduating in 1968 with a B.A. in English, conjointly with a B.Ed. in secondary studies. She later obtained a concentration in French and a certificate in business administration. Her educational formation has been reflected in her work life, which has extended to teaching high school, freelance journalism, and being a partner in her family’s long-time business, George Green and Son Limited. She has also worked in Christian education and as an adult education instructor at both the College of the North Atlantic and MUN’s Lifelong Learning Department, for business and conversational French, respectively. Additionally, she performed bilingual contract work in the federal public service and worked as a substitute teacher.Her desire to contribute and keep busy she attributes to her parents’ lifestyle as small business owners and community leaders in Bonavista North. Marie-Beth has also contributed greatly in her volunteer life to the SPCA, Gower Street United Church, L’Association francophone de Saint Jean, the Terry Fox Run, the Encounters with Canada program, and Canadian Parents for French, an organization in which she has been granted lifetime membership status.Marie-Beth is married to Carl Wright, a retired mathematics and history teacher from Greenspond. They are the parents of two sons, Geoffrey and Jordan. Marie-Beth began research on Grace Sparkes in 2006, but work commitments and family life slowed the manuscript’s progress. Marie-Beth’s interests range from politics, the environment, her community, and social issues to travelling, sports, and choral singing. She confesses that Grace’s spirit of involvement has made her more active in the community since she began her research. Marie-Beth thanks the many wonderful friends and relatives of the indomitable Ms. Sparkes who kindly provided source material for this work.

Corey Majeau is an author, illustrator, and cartoonist born in Edson, Alberta. After falling in love with the rocky shores of Newfoundland, he decided to make it his home. Corey has been a cartoonist and graphic designer for over a decade, with his work spread across multiple platforms and small presses. His cover designs have been nominated for several awards and featured on numerous bestselling titles. He resides in Gander, NL, with his wife and best friend, Candace, their son Jack, and daughter Charlie.

Other titles by Marie-Beth Wright

Other titles by Corey Majeau

Our Heroes of COVID-19