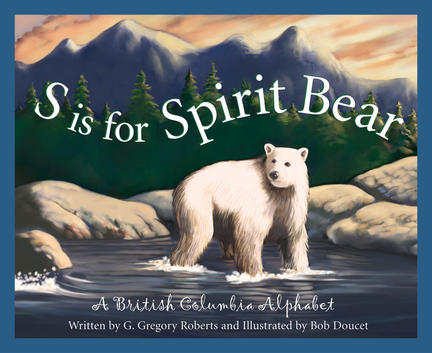 British Columbia is filled with supernatural beauty and fascination. Its diverse wildlife population includes killer whales, giant Pacific octopus, cougars, moose, grizzlies and spirit bears, a rare black bear that, because of a recessive gene, has all-white fur. Children will be awed to learn of legendary creatures reportedly sighted in British Columbia, such as the serpent-like lake demon called Ogopogo and the big-footed beast known as Sasquatch. They will also learn of Canada's Iceman, an ancient hunter whose body and clothing were nearly perfectly preserved in a glacier for more than 550 years. Capturing the essence of the richly varied regions and islands of British Columbia, S is for Spirit Bear takes children on a journey they will never forget.

Greg Roberts fell in love with British Columbia after attending both the University of British Columbia and the University of Victoria. He was born and raised in Lethbridge, Alberta and after living in Victoria with his wife, who is a budding opera singer and doctoral student, they now reside in Calgary, Alberta. His many talents include barbecuing, making up games for his scout troupe, and authoring young adult novels. Greg also spent two years in the Philippines doing humanitarian service.

Although originally from Boston, Massachusetts, Bob is pleased to make his home on beautiful Bowen Island off the coast of Vancouver, British Columbia. He studied illustration at Rhode Island School of Design and graphic design at Kansas City Art Institute. Since opening his own illustration studio several years ago, he has worked with publishers in the U.K., U.S., and Canada, and has over 20 children’s books in print, in addition to book covers, editorial, and educational pieces. When not making pictures, he plays bluegrass, old-timey and folk music on guitar, mandolin, button accordion, and ukulele.