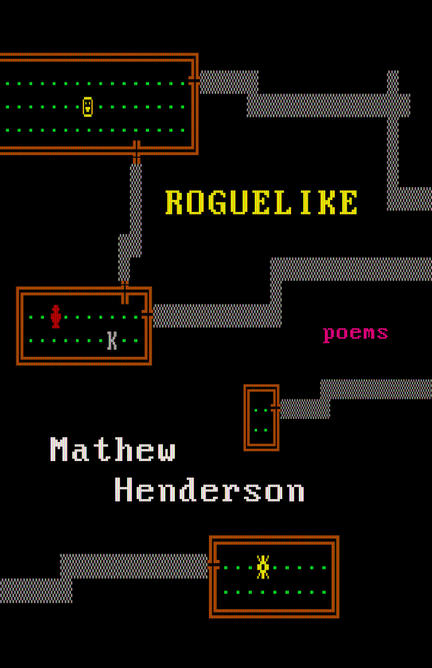 Mathew Henderson explores with remarkable insight the unique logics of video games and addiction in his much-anticipated sophomore poetry collection.

Mathew Henderson’s Roguelike, the much-anticipated follow-up to his acclaimed 2012 debut The Lease, melds the unique online vocabulary, culture, and logic of video games with family and addiction narratives, specifically the poet’s relationship with his mother and her struggle with narcotics. The resulting poems are arresting and fresh, mining game mythology, fantasy, and family history, while exploring the rich connection between video gaming and notions of addiction, repetition, storytelling, and escapism.

Though the poems are largely narrative, ultimately Roguelike is less about stories themselves than it is about the psychological and emotional forces that define how and why we make them — how we’re all moved to shape the disparate and seemingly unconnected events of our lives into something meaningful, to make sense of the past and the present through storytelling.

MATHEW HENDERSON grew up in Tracadie, Prince Edward Island. After he graduated high school, Henderson worked summers in the oil fields of Saskatchewan and Alberta. His experiences there provided inspiration for his first book of poetry, The Lease, which was a finalist for both the Trillium Book Award for Poetry and the Gerald Lampert Memorial Award. Henderson earned an M.F.A. from the University of Guelph and has had poems published in The Walrus, Brick, Maisonneuve, and Best Canadian Poetry.

Other titles by Mathew Henderson