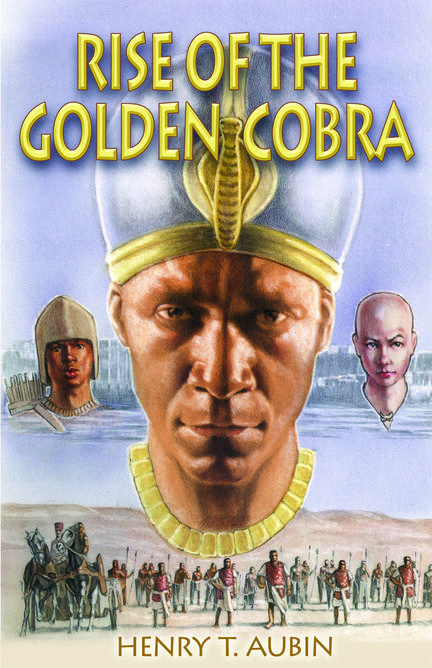 During a picnic overlooking the Nile, 14-year-old scribe Nebi spots the riders first. Led by the treacherous Count Nimlot, the raiding party slaughters Nebi’s master, the region’s head of police. Although wounded, Nebi escapes, the only living witness that the pharaoh’s northern territory is no longer secure.

Nebi is quickly catapulted into events that will change history. Set in 728 B.C., RISE OF THE GOLDEN COBRA surrounds the actual reign of Pharaoh Piankhy, the brilliant and compassionate leader whose astonishing campaign united Ancient Egypt.

Nebi’s adventures take him to the court of Piankhy himself, to friendship with feisty Prince Shebitku, and to war. Fierce battles culminate in the siege of Memphis, where Nebi finally confronts Nimlot and his own desire for revenge. Well-served by the pharaoh’s honorable example, Nebi finds release in letting Nimlot live. Meanwhile, Piankhy’s victory unites North and South Egypt, making him the one true pharaoh entitled to wear the golden cobra crown.

Bursting with action, political intrigue, and military strategy in enticing historical detail, and peppered with dramatic illustrations, RISE OF THE GOLDEN COBRA is an epic adventure for the ages.

HENRY AUBIN, born in 1942, is a Harvard graduate and former reporter with the Washington Post. His series of articles — published by the Montreal Gazette — which formed the embryo for City for Sale won Aubin his second National Newspaper Award and a record-setting third consecutive National Business Writing Award.

“... a well-crafted and intriguing adventure that exposes students to a different world, even as it offers them danger, excitement, and the opportunity to ponder serious moral issues.”

Other titles by Henry Aubin

A Journalist Takes on Tremblay, Olivier, and Other Defenders of Quebec’s Municipal Mergers

The Rescue of Jerusalem

The Alliance Between Hebrews and Africans in 701 BC