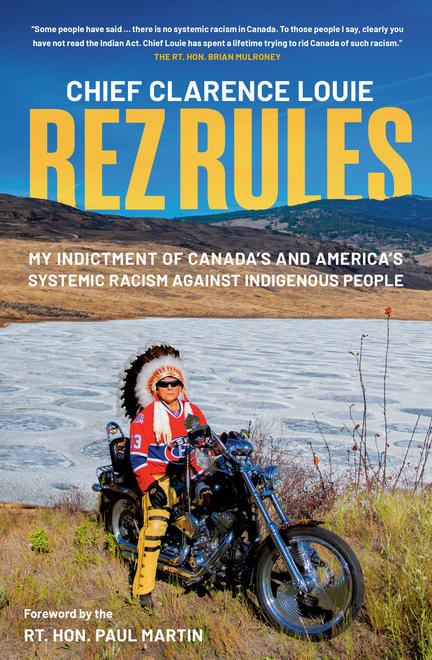 A common sense blueprint for what the future of First Nations should look like as told through the fascinating life and legacy of a remarkable leader.

At the age of twenty-four, in 1984, Clarence Louie was elected Chief of the Osoyoos Indian Band, in the Okanagan Valley. Nineteen elections later, Chief Louie has led his community for nearly four decades. The story of how the Osoyoos Indian Band—“The Miracle in the Desert”—transformed a Native community that once struggled with poverty into an economic powerhouse is well-known. Even today, guided by his years growing up on the Rez, Chief Louie believes that economic and business independence is key to self-sufficiency, reconciliation, and justice for First Nations people.
In Rez Rules, Clarence Louie writes about his youth in Osoyoos, from early mornings working in the vineyards to playing and coaching sports, and attending a largely white school in Oliver, B.C. He remembers enrolling in the “Native American Studies” program at the Saskatchewan Federated Indian College in 1979 (later renamed First Nations University) and falling in love with a collection of books about First Nations history, where reading the old stories and quotes from the famous chiefs—Sitting Bull, Crazy Horse, and Chief Joseph—and learning about the historic significance of treaties was life-changing. And he writes about his first involvement in activism, when he participated in a treaty bundle run across the country to Ottawa, and the path he embarked on when he was elected. Together, he and his band have worked hard to attract business investment, including record levels of employment. Inspired by the youth on his reserve, Chief Louie continues to work for First Nations self-sufficiency and independence. He believes that all First Nations come from “a working culture,” just like his ancestors once did.
Direct and passionate, Chief Louie writes in these pages on wide-ranging subjects: life on the Rez, including Rez language and humour; per capita payments on reservations; elections and the role of elected and hereditary chiefs; the devastating impact of residential schools; the need for First Nations to look to culture and ceremony for governance and guidance; the use by professional sports teams of First Nations names and logos; his love for motorcycle “honour” rides; and what makes a good leader. Throughout, Chief Louie takes aim at systemic racism and examines the relationship between First Nations and colonial Canada and the United States, and sounds a call to action for First Nations to: “Indian Up!” and “never forget our past.”
Rez Rules describes the fascinating life and legacy of a remarkable leader. It offers leadership lessons for on and off the Rez in a common sense blueprint for what the future of First Nations should look like. In it, Chief Louie writes, “Damn, I’m lucky to be an Indian!”

CLARENCE LOUIE has been chief of the Osoyoos Indian Band, in the south Okanagan Valley of British Columbia, for over thirty-six years. In 2013, Maclean's named him one of the “Top 50 Canadians to Watch.” In 2003, Louie was chosen by the U.S. Department of State as one of six First Nations leaders to review economic development in American Indian communities. In 2008, he received the Ernst & Young Entrepreneur of the Year Award. He is a member of the Order of British Columbia, the Order of Canada, and in 2019, he was the first First Nations person ever inducted into the Canadian Business Hall of Fame. In 2021, he received an honorary doctorate from the University of British Columbia.

Other titles by Chief Clarence Louie

My Indictment of Canada's and America's Systemic Racism Against Indigenous Peoples