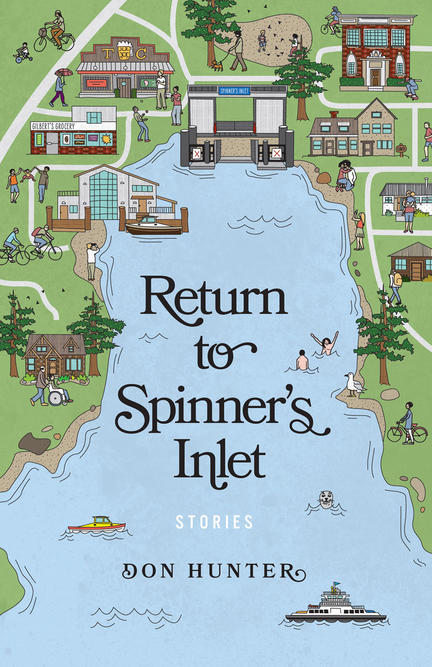 A collection of connected short stories set in a fictional town in BC’s Gulf Islands where attitude is everything, and everybody has one.

For years “Spinner's Inlet” was a beloved serialized newspaper column created by Don Hunter that ran in the Province, Vancouver’s newspaper. Eventually, Hunter compiled the columns and turned them into Spinner's Inlet, the bestselling book published in 1989. Now, thirty years later, Hunter is revisiting the quirky inhabitants of this fictional coastal community, who are ready to entertain a brand-new generation of readers.

Although the cast of characters has evolved, Samson and Rachel Spinner are still around, suitably older and possibly a little wiser, as are some of the more familiar faces from this fictional village in BC's Gulf Islands, where attitude is everything and everybody has one.

A humorous read that’s perfect for fans of Jack Hodgins, Bill Gaston, and Pat Carney, Return to Spinner's Inlet will have you chuckling with recognition.

Don Hunter compiled his fictional columns in The Province about life in a Gulf Islands community for Spinner's Inlet, shortlisted for the Leacock Medal for Humour.

Hunter scripted most of the 1986 CBC Television movie 9B and the network drama mini-series 9B of January/February 1989 (five one-hour shows) based on an original story concerning a year teaching in B.C.'s north country. He grew up near the English Lake District, did his two-years national service in the British Army's 16th Independent Parachute Brigade, and taught high school in England and in British Columbia before joining the Vancouver Province newspaper as a reporter and feature writer and eventually senior columnist. He has contributed to dozens of magazines including Maclean's and Reader's Digest. He has his teacher's certificate from UBC and he has served as President of Local 115 The Newspaper Guild (1976-1977). He and his wife June have two daughters, and they live in Fort Langley, B.C. Please visit www.donhunter.ca.

Other titles by Don Hunter