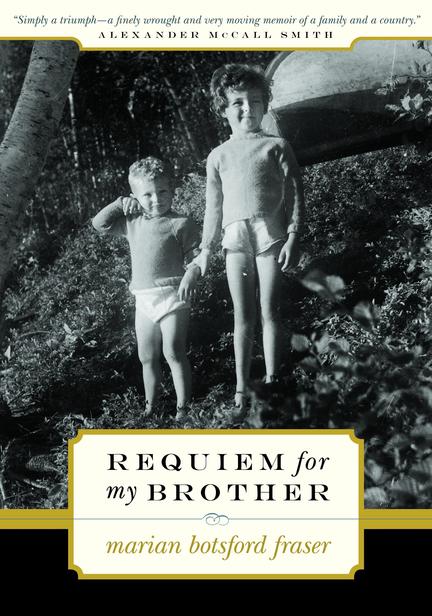 Marian Botsford Fraser's brother, Dave, was diagnosed with multiple sclerosis in 1992. Eight years later, as he struggled with increasing disability, he discovered that he had melanoma, which quickly metastasized. In this poignant sibling memoir, Botsford Fraser describes her brother's illness, their deepening relationship after years apart, her role as caregiver in his final months, and, finally, the curious mix of sorrow and soaring she feels in the hour of his death.

She also remembers their childhood growing up in a mining town in the North, where they climbed forest-fire lookouts in the bush, skated on beaver ponds in winter, and played kick-the-can after supper in summer. As adults, she and Davd forged an enduring bond when they took a canoe trip on the Coppermind River. Most of all, she remembers Dave -- his pain and frustration, his passivity and pride, and then his sudden lightness and humor. This book is her poem to him.

Marian Botsford Fraser is a freelance writer, broadcaster, and critic whose work has appeared in Granta, Walrus, the Globe and Mail, and Toronto Life. She is Books Editor for More Magazine and a contributor to CBC Radio's Ideas and Tapestry. She is also the author of Solitaire: The Intimate Lives of Single Women and Walking the Line: Travels along the Canadian/American Border. She lives in Stratford, Ontario.