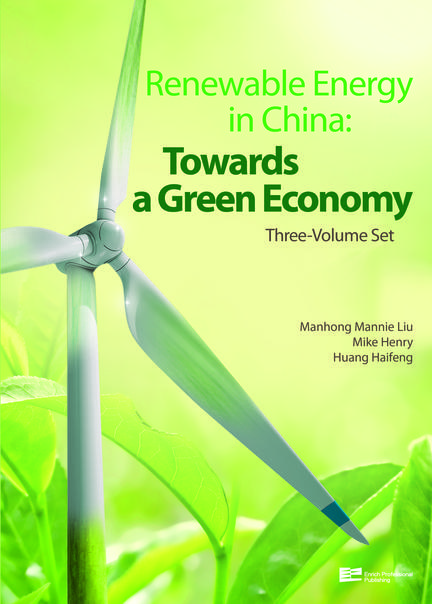 Renewable Energy in China: Towards a Green Economy presents a complete look at China’s efforts to become a “green” nation. This three-volume series uses an overview of contemporary issues of sustainable development, as well as a set of 25 unique case studies (from leading companies and industry experts in China and the West), to highlight China’s unique “green” role. The key concepts of sustainable development, including the rising use of solar and wind power, present complex challenges for China and shape the nation’s geopolitical role. With a preface from renowned statesman Cheng Siwei and an introduction from Nobel Prize winner Mohan Munasinghe, Renewable Energy in China: Towards a Green Economy offers an authoritative review of all aspects of China’s progress as a green economy including the nation’s current efforts to promote a culture of sustainable development.

Manhong Mannie Liu, Ph.D. in Applied Economics (Cornell), is a Professor and Ph.D. advisor at the School of Finance, Renmin University of China, Financial Advisor to the Beijing Municipal Government, Director at the Boston China VC Research Center and the Renmin University Venture Capital and Private Equity Research Center, and on the board of Chief Group in Hong Kong. Prior to her return to China, she was a member of the Research Faculty at Harvard University.

Haifeng Huang obtained his doctorate at Humboldt University of Berlin. He is serving as professor and the director of the Center for Green Economy, Peking University HSBC Business School, as Asian Chairman in the Ecological Development Union International, and as supervisor of the Ministry of Land and Resources.

China has been experiencing more than 30 years of rapid growth since the start of Reform and Opening Up in 1978. During the global financial crisis, China’s Gross Domestic Product (GDP) still grew at 8.7% and reached CNY33.5 trillion (USD4.9 trillion) in 2009. However, China’s high-investment, low-efficiency development model has contributed to the rise of severe pollution issues. In 2003, China accounted for 4% of global GDP, but consumed 30%, 40%, and 31% of the total world outputs of steel, cement, and coal, respectively, and the losses caused by environmental pollution and ecological destruction equaled 15% of its GDP. In 2006, China overtook the U.S. as the world’s largest annual carbon dioxide emitter with 610 billion tons of emissions, an increase of 153% over 1990.

Current policies on renewable energy must also be strengthened to demonstrate China's global leadership in this area and build the energy framework for sustainable development.