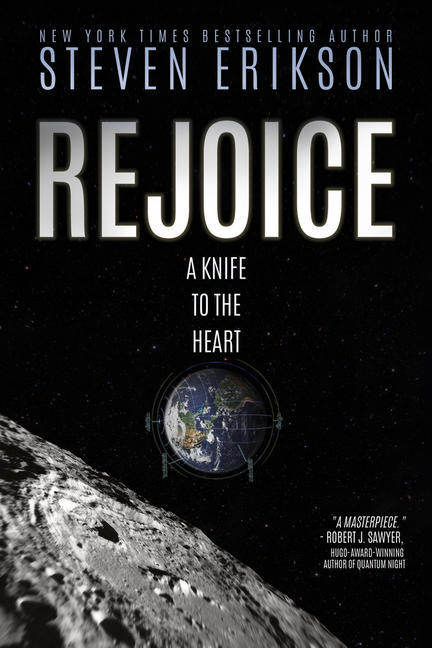 A provocative, beautiful and visionary novel of first contact by New York Times bestselling author Steven Erikson.
Imagine a First Contact without contact, and an alien arrival where no aliens show up. Imagine the sudden appearance of exclusion zones all over the planet, into which no humans are allowed. Imagine an end to all violence, from the schoolyard bully to nations at war. Imagine an end to borders, an end to all crime. Imagine a world where hate has no outlet and the only harm one can do is to oneself. Imagine a world transformed, but with no guidance and no hint of what’s coming next. What would you do? How would you feel? What questions can you ask – what questions dare you ask – when the only possible answers come from the all-too-human face in your mirror?
On the day of First Contact, it won’t be about them. It will be about us.

Steven Erikson is a New York Times bestselling author renown for writing The Malazan Book of the Fallen, a ten-volume series that has sold millions of copies worldwide and is recognized as number two of the top 10 fantasy books by Fantasy Book Review and one of 30 best fantasy series of all time by Paste Magazine. He is a trained archaeologist and anthropologist who has published over twenty books, most of which explore notions of privilege, power hierarchies, and the rise and fall of civilizations, or take the piss out of the same. Erikson has been nominated for the Locus Award four times and the World Fantasy Award twice. His next novel Rejoice, a Knife to the Heart, is an SF First Contact story, due out in October, 2018. He lives in Victoria, B.C. with his lovely wife Clare.

"Steven Erikson hasn't just reinvigorated the first-contact novel, he's reinvented it. This is a wholly original book, brilliantly conceived and flawlessly executed, with a fascinating central conceit related to curbing human violence. And, for once, we have a novel set in a world in which not only does the science-fiction genre exist but it's respected. A masterpiece." — Robert J. Sawyer, Hugo Award-winning author of Quantum Night

"Finally, an alien invasion apocalypse I can get behind. Erikson pulls no punches in this absolutely cutting look at where humanity is at, where we're going, and the monumental changes that need to happen to pull us out of our death spiral. Rejoice I did at this thrilling tale masterfully told." — H.G. Bells

"In Rejoice, Steven takes the varied viewpoints and clever worldbuilding showcased in the Malazan series and applies it close to home, twisting the first-contact premise to highlight our struggles and suggest possible solutions. As a study of humanity’s strengths and flaws, this latest novel stands out for its pointedness and its rich blend of the fantastic and the literary.” — Brandon Crilly, Black Gate Magazine

“Steven Erikson has one of the finest minds alive. Now, in Rejoice, Erikson shows us what he sees when he considers the future of humanity. He calls it a thought experiment. I call it an important book.” — Stephen R. Donaldson

“This is startling and thought-provoking stuff – just what science fiction should be. Read it and try to think as you once did about, well, anything. Go on. I dare you.” — Ian C. Esslemont

"A stunning novel of first contact and humanity’s place in the world." — Gareth L. Powell

Other titles by Steven Erikson

The Second Book in the Kharkanas Trilogy

Willful Child: The Search for Spark