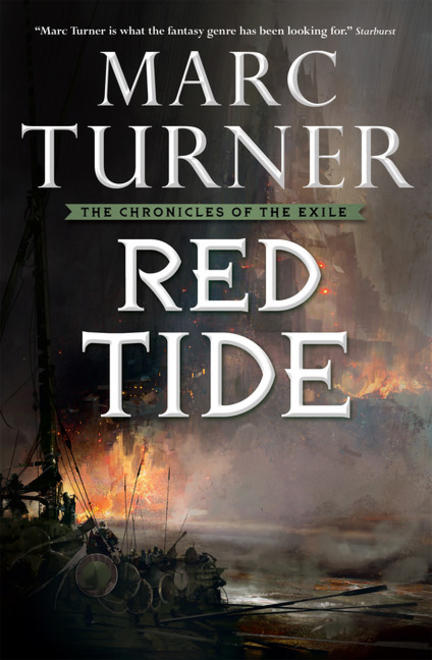 The Augerans are coming. And their ships are sailing in on a red tide.

The Rubyholt Isles are a shattered nation of pirate-infested islands and treacherous waterways shielding the seaboards of Erin Elal and the Sabian League, a region even dragons fear to trespass.

The Augerans beseech the Warlord of the Isles, seeking passage for their invasion fleet through Rubyholt territory. But they are sailing into troubled waters. Their enemies have sent agents to sabotage the negotiations, and to destroy the Augeran fleet by any means necessary.

The emperor of Erin Elal seeks to forge an alliance with the Storm Lords, hoping to repulse the Augerans with a united front. But the battle lines for the struggle are not as clearly drawn as it first appears, for the Emira of the Storm Isles mistrusts the Erin Elalese as much as she does their common enemy. And the Augerans might just be planning a little sabotage of their own.

But nothing in the realm of mortals escapes the notice of their meddling gods; every step they take is shadowed, and every choice they make ensnared in a web so subtle and vast, its true shape may be fathomed only when it is far, far too late.

MARC TURNER was born in Toronto, Canada, but grew up in England. He graduated from Lincoln College, Oxford University, in 1996 with a BA (Hons) in Law, and subsequently worked at a top-ten law firm in London. After more than ten years in the legal profession he gave in to his lifelong writing addiction and is a full-time writer. His other novels areWhen the Heavens Fall andDragon Hunters.

"A compelling read brimming with magic and action, scheming and intrigue.When the Heavens Fallis an impressive debut. I look forward to more tales from Marc Turner." - D. B. Jackson, author of the Thieftaker Chronicles

"Love, revenge, devious gods, legions of undead, great sacrifice-this one has it all! Good old-fashioned swords and sorcery, turned up a notch." - Ed Greenwood, creator and author of the Forgotten Realms series

"Turner has created a powerful fantasy where mystery and magic pervade each character, each quest, each corner of a vast and vibrant world.... The battles and betrayals that fill the pages ofWhen the Heavens Fallare truly epic in their scope and impact." -Brian Staveley, author of The Emperor's Blades

"Beautifully imagined and complex...Gritty and dark, the scope of Turner's world will keep readers rapt and nervous--which is the hallmark of great worldbuilding." -Elizabeth Haydon, USA Today bestselling author of The Symphony of Ages

"A classic epic fantasy, with a complex world, interesting characters, and plenty of action." -Gail Z. Martin, author of Reign of Ash

Other titles by Marc Turner

The Chronicle of the Exile, Book Two

When the Heavens Fall

The Chronicles of the Exile, Book One