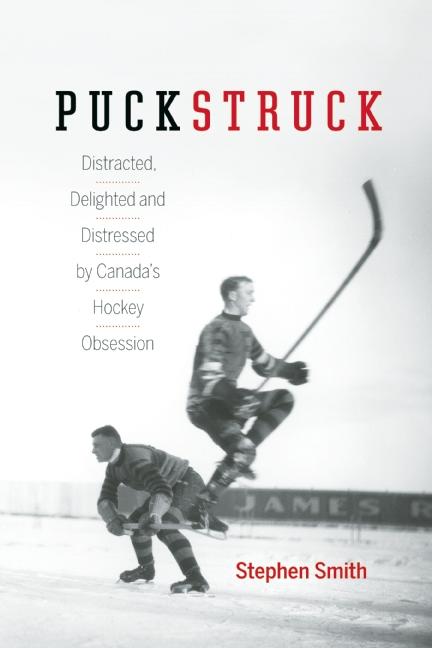 Like many a Canadian kid, Stephen Smith was up on skates first thing as a boy, out in the weather chasing a puck and the promise of an NHL career. Back indoors after that didn’t quite work out, he turned to the bookshelf. That’s where, without entirely meaning to, he ended up reading all the hockey books. There was Crunch and Boom Boom, Slashing! and High Stick; there was Max Bentley: Hockey’s Dipsy-Doodle Dandy, Blue Line Murder, and Nagano, a Czech hockey opera. There was Blood on the Ice, Cracked Ice, Fire On Ice, Power On Ice, Cowboy On Ice, and Steel On Ice.

In Puckstruck, Smith chronicles his wide-eyed and sometimes wincing wander through hockey’s literature, language, and culture, weighing its excitement and unbridled joy against its costs and vexing brutality. In exploring his own lifelong love of the game, hoping to surprise some sense out of it, he sifts hockey’s narratives in search of hockey’s heart, what it means and why it should distress us even as we celebrate its glories. On a journey to discover what the game might have to say about who we are as Canadians, he seeks to answer some of its essential riddles.

Stephen Smith's stories about five dollar bills and boy travel writers have appeared in Geist and McSweeney's. He has also written for the Globe and Mail, Canadian Geographic, Outside, and the New York Times Magazine. He lives in Toronto, where he tends a blog, Puckstruck.com, that keeps an eye on hockey culture. Puckstruck is his first book.

"With a love of words as deep and impassioned as his love of hockey, Smith delivers a maddening opus for the ages."Publishers Weekly

"Puckstruck is irreverent, eclectic, irascible, witty, smart, and highly informed. It should be required reading for every 'hockey insider' analyst and bar-stool GM in ice country."Roy MacGregor

"This is a book after my heart: hockey and literature waltzing together to the music of the author's careful, artful prose. Funny, wistful, smart and unlike any hockey book I've read (although I clearly haven't read as many as Mr. Smith)."Dave Bidini, author of Tropic of Hockey

"Puckstruck is like nothing I’ve read before--fresh, funny, dazzling and brilliant. Can a hockey book ever really be described as Joycean? This one can." Charles Foran

"Hockey wasn’t invented but discovered. The game, and the large organizing idea behind Stephen Smith’s deeply personal Puckstruck, sleeps in ponds and in the crooked limbs of trees overhead; we merely pluck a stick from the sky and skate over the frozen world to find ourselves and each other. It’s rare to find a book that makes me proud to be Canadian: A funny, myth-busting, life-loving read."Michael Winter