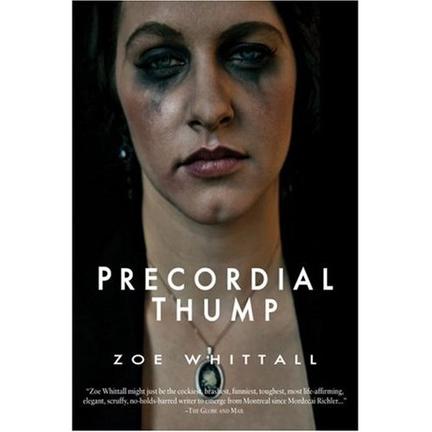 This is a gutsy, gritty, urban, urbane, and sleek selection by a poet evocatively skilled in her craft!A "precordial thump" is a single punch to the center of the sternum, an attempt to start the heart. In Zoe Whittall’s third book of poetry, lies erode a relationship, romance blooms in the back of an ambulance and the poet examines the implied sincerity in confessional poetry. At the intersection of emergency medicine and emergency poetry, Whittall aims to break down the larger lies of poetic form and the smaller dishonesties within ourselves.

ZOE WHITTALL’s third novel, The Best Kind of People is currently being adapted for limited series by director Sarah Polley. It was shortlisted for the Scotiabank Giller Prize, named Indigo’s #1 Book of 2016, a Heather’s Pick and a Best Book of the Year by the Walrus, the Globe and Mail, Toronto Life and the National Post. Her second novel, Holding Still for as Long as Possible, won a Lambda Literary Award for trans fiction and was an American Library Association Stonewall Honor Book. Her debut novel, Bottle Rocket Hearts, won the Dayne Ogilvie Prize and is being adapted for screen. In 2014 Whittall sold her first sitcom, Breaking, to CTV, and recently optioned the half-hour comedy Wellville to CBC. She has worked as a TV writer on the Emmy Award–winning comedy Schitt’s Creek and the Baroness Von Sketch Show, for which she won a 2018 Canadian Screen Award. She has written three volumes of poetry, most recently an anniversary reissue of The Emily Valentine Poems, about which Eileen Myles said, “I would like to know everything about this person.” Zoe Whittall was born on a sheep farm in the Eastern Townships of Quebec, has an MFA from the University of Guelph and has called Toronto home since 1997.

"Whittall's background as a poet shines...her voice hits hard and with beauty."

"Zoe Whittal might just be the cockiest, brashest, funniest, toughest, most life-affirming, elegant, scruffy, no-holds-barred writer to emerge from Montreal since Mordecai Richler..."

Other titles by Zoe Whittall

The Best Kind of People

Holding Still For As Long As Possible