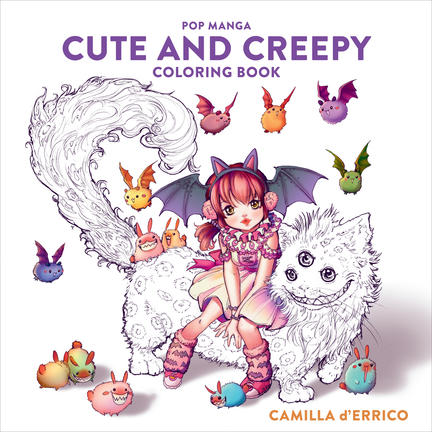 The characters, animals, and monsters in this manga-inspired adult coloring book from a mega-popular Pop Surrealist artist are so cute they're scary!

Pop Surrealism superstar Camilla d'Errico returns with an adult coloring book featuring her one-of-a-kind, manga-influenced artwork that fans and art collectors around the world clamor for and amass. Pop Manga Cute and Creepy Coloring Book shines a light on the darker side of her art, offering devotees and coloring enthusiasts her signature take on monster girls, ghosts, and the undead; spooky double-page spreads; and stunning, surreal, wallpaper-like designs perfect for decorating your haunted houses.

One of the few adult coloring books to feature artwork by an artist at the top of her field, Pop Manga Cute and Creepy Coloring Book gives readers a chance to collaborate with a notable artist and create unique collectible pieces they'll want to share with friends.

Camilla d'Errico has gained wide acclaim for her illustrative work, including nominations for the Joe Shuster Award and the Will Eisner Award. She is the co-author of Pop Manga and the author of Pop Painting, Pop Manga Coloring Book, Pop Manga Mermaids and Other Sea Creatures, Pop Manga Drawing, and the forthcoming graphic novel Helmetgirls: The Shadow at Our Backs, which she co-authored with best-selling comic book writer Joshua Dysart. She has worked with Dark Horse Comics, Image Comics, Hasbro, Disney, Sanrio, and Neil Gaiman, and created her own cult-sensation properties Tanpopo and Helmetgirls. She is also well known for her melting rainbow, big-eyed girl oil paintings, which have made her a hit in the international Pop Surrealism movement.

Other titles by Camilla d'Errico

A Surreal Journey Through a Cute, Curious, Bizarre, and Beautiful World

Inspiration and Techniques from the Pop Surrealism Art Phenomenon

How to Draw the Coolest, Cutest Characters, Animals, Mascots, and More