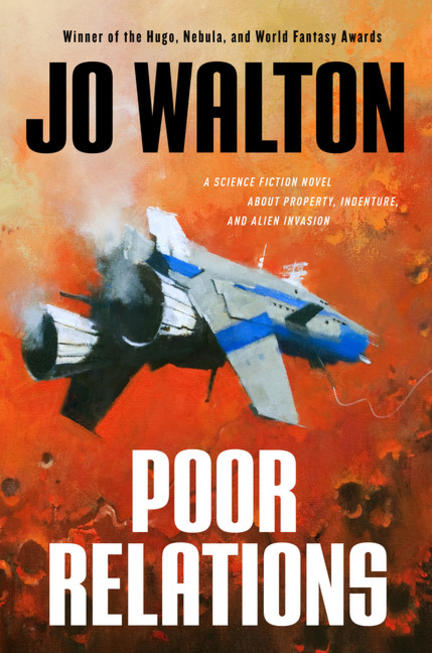 An eye-opening and entertaining tale of social and financial precarity in the interplanetary future, brilliantly imagined and entirely pertinent to today.

It's the twenty-fourth century. Humanity has spread throughout the solar system—but for most of us, life is as precarious as it was in Dickensian England. And while individuals can change their sex at will, traditional gender roles are enforced with unyielding severity.

Brothers Achille, Marcantonio, and Nore have been raised rich, but after their father spends the family fortune and puts a laser to his head, they’re forced to face facts. The wealthy Luke Bailey is willing to pay top dollar for what’s left of their estate, enough to buy Achille a commission in the space Navy. But only if Marcantonio and Nore will both become female—Marcantonio to marry Luke, and Nore to be their spinster housekeeper, for as long as Luke lives.

Over the next two decades, the now-female Marcantonio and Nore struggle to make lives for themselves in the service of their wealthy keeper. Then the alien invasion arrives.

Jo Walton has published thirteen novels, most recently Necessity. She has also published three poetry collections and an essay collection. She won the John W. Campbell Award for Best New Writer in 2002, the World Fantasy Award for Tooth and Claw in 2004, the Hugo and Nebula awards for Among Others in 2012,  and in 2014 both the Tiptree Award for My Real Children and the Locus Non Fiction award for What Makes This Book So Great. She comes from Wales but lives in Montreal where the food and books are much better. She gets bored easily so she tends to write books that are different from each other. She also reads a lot, enjoys travel, talking about books, and eating great food. She plans to live to be ninety-nine and write a book every year.

“Haunting character complexity that ultimately holds the reader captive to the tale.” —N. J. Jemisin,New York Times, onMy Real Children
“A spectacular coming-of-age tale that encompasses everything from courtroom dramas to sexual intrigue.” —Cory Doctorow onThe Just City
“Brilliant, compelling, and, frankly, unputdownable.” —NPR onThe Just City
“Most fantasies evade [the] great and challenging opportunities to make the implausible plausible, to give magic accountability in a realistic setting and moral and emotional weight in a modern novel. Jo Walton accepts the double challenge and meets it with courage and skill.” —Ursula K. Le Guin onAmong Others

“Has as much in common with an Alice Munro story as it does with, say, Philip K. Dick. Good novels show us a character’s destiny as an expression of who they fundamentally are. What most novels do only once,My Real Children does twice.” —Lev Grossman onMy Real Children

Other titles by Jo Walton

Or What You Will

A Novel of Many Returns

An Informal History of the Hugos

The Complete Trilogy (The Just City, The Philosopher Kings, Necessity)