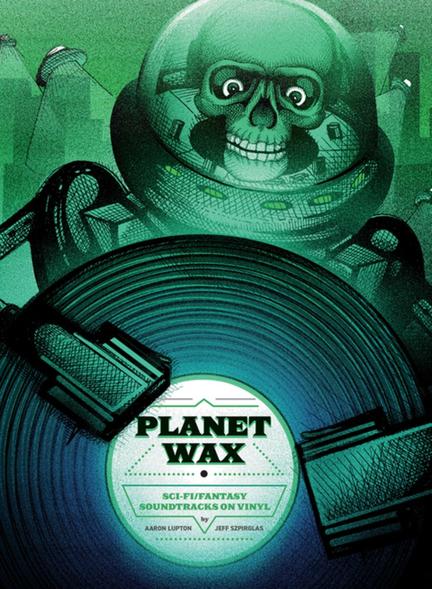 Do you crank up your stereo and conduct air symphonies to John Williams' Star Wars? Know all of the lyrics to "The NeverEnding Story" or "Xanadu?" Have a burgeoning collection of space disco albums? Well, pluck those Ceti Alpha eels out of your ears and open this book – we've got you covered.

From the orchestral bombast of Jerry Goldsmith's Star Trek: The Motion Picture score, to the muscle-flexing might of Basil Poledouris' Conan the Barbarian, to the dreamy electronic soundscapes of Vangelis' Blade Runner and the pop styling of the Flash Gordon soundtrack, science fiction and fantasy films have inspired some of the most beloved and memorable soundtracks in film history.

Planet Wax covers the best, as well as the most unique and underrated scores the sci-fi and fantasy genres have to offer, while showcasing their original vinyl LP artwork over 240 pages. Franchises like Mad Max, The Terminator, and even the Indiana Jones films are spotlighted, along with television classics such as Doctor Who and Star Trek, making Planet Wax the definitive discography of soundtracks from the films and shows of the '60s, '70s, '80s, and '90s that shaped multiple generations.

Featuring over twenty interviews, including composers Stu Phillips (Battlestar Galactica), Laurence Rosenthal (Clash of the Titans), and directors Richard Donner (Superman) and Nicholas Meyer (Star Trek II), Planet Wax chronicles an era in film and music when the sounds were given as much prominence as the interstellar imagery.

Aaron Lupton and Jeff Szpirglas, co-authors of Blood on Black Wax: Horror Soundtracks on Vinyl, will take you on the ultimate trip to the far reaches of both the cosmos and their record collections.

JEFF SZPIRGLAS is the author of multiple books in the Countdown to Danger series. In addition to his choose-your-own-path titles, Jeff has written award-nominated non-fiction books and several terrifying novels and horror collections for middle-grade readers, including Tales from the Fringes of Fear and Tales from Beyond the Brain. With his wife, Danielle Saint-Onge, he is the co-author of the Orca Echoes books X Marks the Spot!, Something's Fishy and Messy Miranda. He's worked at CTV Television and was an editor at Chirp, chickaDEE and Owl magazines. He has twin children, two cats (the cats are not twins) and one dog. In his spare time, he teaches elementary school. He lives in Kitchener, Ontario. Visit him online at www.jeffszpirglas.com.

"A painstakingly compiled catalog packed with meticulous details that will prove a fun nostalgia trip for fans of the genres. An eye-catching, enjoyable, and informative celebration of iconic sci-fi and fantasy movie scores." - Kirkus Reviews

"Some readers may recall how high Decibel was on Aaron Lupton and Jeff Szpirglas’ jaw-droppingly gorgeous, revelatory metal-heavy tome on soundtracks from the dark side of cinema, Blood on Black Wax. Well, the dynamic duo have now followed up that triumph with the equally brilliantine Planet Wax: Sci-Fi/Fantasy Soundtracks on Vinyl from the insanely amazing 1984 Publishing." - Decibel

"Finding solace in sound and celluloid is significantly important these days, and Planet Wax is a portal that will transport audiences to a better time, place, and feeling, all within its crisp, brightly colored pages. An epic trip down memory lane." - Slash Film

"Planet Wax entombs undervalued masterpieces in one gigantic, thrilling read. Essentially, it’s like reading a massive collection of liner notes, which was always part of the fun when purchasing a new soundtrack." - Coming Soon

"An illustriously designed tome. For audiophiles, vinyl collectors and soundtrack lovers, this is a must-have book for your collection." - Movieweb

"One of the best gift books this holiday season." - The Globe and Mail

Other titles by Aaron Lupton

Other titles by Jeff Szpirglas

Tales from the Fringes of Fear

Tales from Beyond the Brain