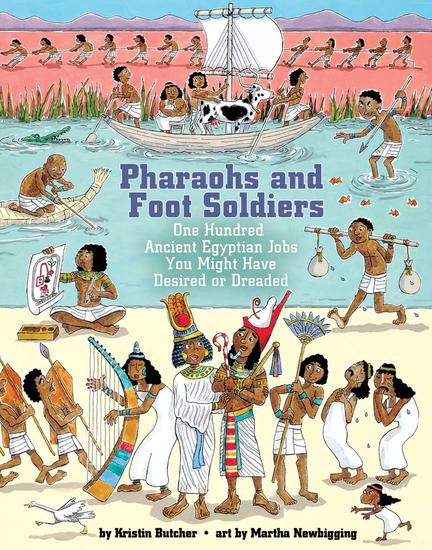 MARTHA NEWBIGGING has illustrated for numerous magazines including TreeHouse Family, Canadian Business, Toronto Life, TV Guide, and Destinations. Her illustrations have also been featured on a line of t-shirts for the famous Canadian casual clothing retailer Marci Lipman. She lives in Toronto.

Pharaohs and Foot Soldiers: One Hundred Ancient Egyptian Jobs You Might Have Desired or Dreaded

The fourth in Annick’s series of historical jobs is another romp through a unique time and place – in this case, Ancient Egypt. It is similar in format to the others, a little bit of history followed by detailed descriptions of one hundred jobs divided into various categories. While some jobs are basically the same whether you are in the Middle Ages or Ancient Egypt (baker, priest, teacher, doctor), some are specific to this place. Perhaps you would like to be a charioteer, or an architect designing a pyramid, a reed cutter in the Nile, someone who fans the Pharaoh, or maybe you would like to be an embalmer who prepares bodies for their mummy case? Most Egyptian jobs were passed from parent to child so people didn’t usually have a lot of choice.

Author Kristin Butcher brings a chatty, informal tone to the text along with lots of information that is clear and easy to understand. Martha Newbigging, who has illustrated the others in the series, once again has fun with the pictures, using her characteristic cartoon style to extend the information and entertain the reader at the same time. It continues to be an original and useful series that provides young readers with an interesting window into another culture.

Pharaohs and Foot Soldiers: One Hundred Ancient Egyptian Jobs You Might Have Desired or Dreaded

Take an entertaining and insightful stroll through one of history’s most remarkable civilizations. The featured occupations, which range from archer to vizier, are divided into ten groups. Learn about Ancient Egypt through fascinating profiles of the jobs people performed 5,000 years ago. A bibliography and an index are included.

Other titles by Kristin Butcher

The Bridge of Whispers

The Druid and the Dragon

In Search of Sam

Truths I Learned From Sam / In Search of Sam

Truths I Learned from Sam

Other titles by Martha Newbigging

One Hundred Ancient Chinese Jobs You Might Have Relished or Reviled

100 Bible Land Jobs You Might Have Praised or Panned

Dirt on Dirt, The

The Dirt on Dirt

One Hundred 19th-Century Jobs You Might Have Feared or Fancied

How Investigators Use Science to Track Down the Bad Guys

The Panic-Proof Guide to Surviving Homework