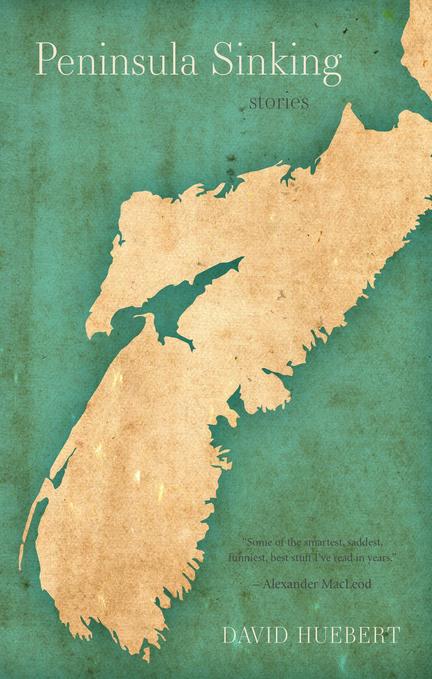 Winner of the 2018 Jim Connors Dartmouth Book Award for Fiction

Shortlisted for the 2018 Alastair MacLeod Prize for Short Fiction

In Peninsula Sinking, David Huebert brings readers an assortment of Maritimers caught between the places they love and the siren call of elsewhere. From submarine officers to prison guards, oil refinery workers to academics, each character in these stories struggles to find some balance of spiritual and emotional grace in the world increasingly on the precipice of ruin. Peninsula Sinking offers up eight urgent and electric meditations on the mysteries of death and life, of grief and love, and never shies away from the joy and horror of our submerging world.

Originally from Halifax, David Huebert has lived in Revelstoke, Fernie, Victoria, and Toronto. Currently a PhD student at Western University, his poetry has appeared in journals such as Event, Vallum, The Antigonish Review, and The Literary Review of Canada. His fiction has appeared in Grain, Existere, and The Dalhousie Review. we are no longer the smart kids in class is his first poetry collection.

“[Peninsula Sinking]establishes Huebert as one of Canada's most impressive young writers ... the stories are far-reaching, but tightly woven, each focused on characters in significant moments of development or change.”—Robert Wiersma, Quill & Quire

“A sense of wonderment penetrates the everyday lives of characters from the Maritimes in this well-crafted, compelling collection that displays a mastery of classical short-story structure and technique. Huebert’s vibrant language juxtaposes tough characters with tender preoccupations, creating narratives that are unsettling and mesmerizing, making ordinary moments in relationships thrilling and dangerous.”—Danuta Gleed Literary Award Jury

“Peninsula Sinking comes on like weather: A gust, then calm, then a whiteout, then sheet lightning followed by a bone-soaking warmth as another treacherous cloudbank forms in the distance. David Huebert’s prose doesn’t flag, not once. Each sentence is alive and crackling. His turns of phrase will catch your breath in your throat. These stories will sweep you up.”—Laurie D. Graham, author of Rove

“…one of those young writers who has the ability and confidence to present the everyday in extraordinary ways. Many of his characters are seemingly trapped not only by common demands and current circumstances but also by their own desire to be unambitious. His characters might sometimes be a little lost, but like David Huebert’s writing they often soar far above the mundane and demand to be hard.”—David Layton, author of The Dictator

“Peninsula Sinking brings all of the beauty, grace and heartbreak that the form excels at and then rattles you with its imagery...this collection is remarkable, and it speaks to a talent that will be unfolding before us for some time.” —The East Mag

“A paean to intimacy and to things rarely seen, ‘Enigma’ is an eloquent meditation on the mystery of life and death, love and grief, both human and animal. This is a vivid personal narrative of remarkable spiritual and emotional grace.”—CBC Short Story Prize Jury Statement

“I was impressed by the way that “Colloquium: J.T. Henry and Lady Simcoe on Early Ontario Petrocolonialism” repurposes historical texts to frame the ongoing violence of extraction and dispossession within the language of early settlers.”—Damien Rogers

"These poems have the keys to the zoo, and they’re ready to let the wild rumpus start.”—Geoffery Morrison

Other titles by David Huebert

we are no longer the smart kids in class