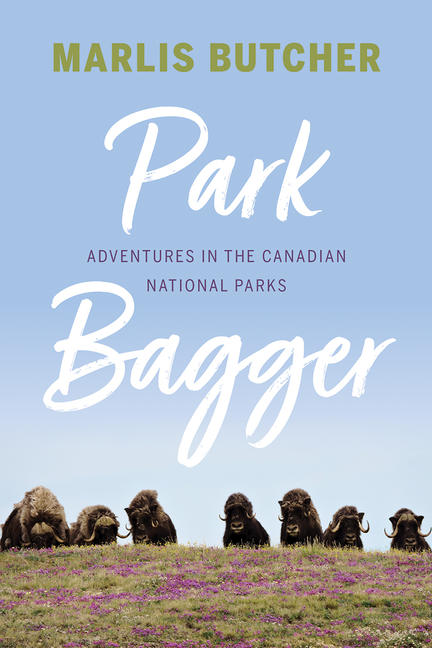 Distributed across the second-largest country in the world, the Canadian national parks can be challenging to get to. Many of them are so remote that they have no road access or infrastructure of any kind, but they are not impossible to visit. Although much of the vast Canadian wilderness is fraught with challenging terrain, unpredictable weather, and sometimes threatening wildlife, there are also pleasant beaches, waterfalls, and places to kick back and relax in.

Explorer Marlis Butcher has "bagged" all of the Canadian national parks. In her quest to visit and get to know the parks, Marlis canoed, kayaked, mountain biked, backpacked, hiked, snowshoed, snorkelled, and trekked by whatever means of travel she could devise. During her park explorations she's encountered grizzly and black bears, polar bears, wolves, and wolverines. She's survived incredible storms, falls off mountainsides, and sinking boats. Marlis has investigated uncharted lands and travelled down quaint country roads. In Park Bagger, she shares her adventures, with the objective to encourage others to explore the national parks and to protect Canada's vast wilderness.

Marlis Butcher grew up in the suburbs of Montreal, but discovered a love for the outdoors early in life. Whether camping with the Girl Guides or volunteering to shovel snow, she strived to get outside. Her head for maths, however, led her into a career in Toronto’s major financial institutions. During those 30 years, Marlis used her vacations to follow her heart. She travelled the world, exploring the wild places of Canada and the curiosities on every continent. Along the way, she took outdoor skills and wilderness survival courses. As friends and colleagues asked her to share her unusual stories, she started writing, and embarked on a new career. Her detailed travel journals and photography became the basis for several published magazine articles, and caught the attention of The Explorers Club and the Royal Canadian Geographical Society, in both of which she’s been honoured with membership. Marlis lives in Burlington, Ontario.

“Wow! To the world’s list of dauntless, determined, and inspirational adventurers, we must now add the name Marlis Butcher. This impressive work brings to life her decades-long exploration of Canada’s national parks and finds her ranging among glacier-fed lakes, white-water rivers, and snow-capped mountains – not to forget ocean waters east, west, and north. Park Bagger is a keeper.” — Ken McGoogan, author of Dead Reckoning: The Untold Story of the Northwest Passage and Flight of the Highlanders: The Making of Canada

“Few of us will ever get the chance to experience all of Canada’s national parks, but for those of us who can’t, Marlis Butcher’s book offers armchair travellers an escape into the wilds of Canada’s diverse national parks. It’s an eloquent tribute to these national treasures.” — Adam Shoalts, Ph.D., national bestselling author of Beyond the Trees: A Journey Alone Across Canada’s Arctic

“Marlis Butcher has an insatiable curiosity that is infectious. This intrepid, never-say-can’t, modern-day explorer’s account of her quest to visit every one of Canada’s national parks leaves me with an enriched sense of our vast nation’s unique resources, history, and culture.” — Sharon Wood, Canadian mountaineer, author of Rising: Becoming the First North American on Everest

“Intrepid explorer Marlis Butcher’s new book captures the uniqueness, majesty, and beauty of Canada’s national parks. Over years, she braved extreme weather, rugged terrain, and isolation to experience the raw, awe-inspiring allure that is Canada.” — Milbry Polk, author of Women of Discovery: A Celebration of Intrepid Women Who Explored the World

“Canada’s national parks are not ‘parks’ in the manicured, civilized, effete sense of the word. Instead they are sprawling, remote wilderness refuges populated by wolves, grizzly bears, and sea lions, often difficult to access and barely explored. Marlis Butcher proves herself to be up to the challenge of getting to all of them, hiking through them, photographing them, and, most importantly, writing about her adventures in them with entertaining skill and passion. Highly recommended.” — Peter Rowe, adventurer, filmmaker, and author of Adventures in Filmmaking

“Anyone wanting to experience the Canadian outdoors in an utterly unique way will find themselves immersed, transported through this country’s beauty with Marlis Butcher’s Park Bagger, a wonderful read for nature lovers and travellers alike.” — Bill Arnott, bestselling author of Gone Viking: A Travel Saga

“It’s no secret that many Canadians spend more time and effort travelling overseas than exploring the rich, varied, and exquisite beauty of their own country. Not so for Marlis Butcher, who made it her mission to visit Canada’s 48 national parks. From paddling the country’s northernmost navigable waterway, the Thomsen River in the High Arctic’s Aulavik National Park, to kayaking alongside sea lions in Haida Gwaii and hiking among antelope in Saskatchewan’s Grasslands National Park, Butcher shares lively stories of tenting in driving rain, snowshoeing in frigid temperatures, and savouring a picnic lunch while whale watching on a sunny day in Nova Scotia’s Kejimkujik National Park, all with a hope of inspiring others to experience Canada’s greatest treasures.” — Lynn Martel, author of Stories of Ice: Adventure, Commerce and Creativity on Canada’s Glaciers and Tales & Trails: Adventures for Everyone in the Canadian Rockies

“Marlis Butcher takes us on a fabulous romp through our national parks. An inspiring read that will make you want to get off the couch and set off into the great wilderness areas of Canada.” — Frank Wolf, wilderness adventurer, documentarian, and author of Lines on a Map: Unparalleled Adventures in Modern Exploration

“What a grand adventure! It may have taken the better part of her adult life to accomplish, but we all get to benefit from Marlis Butcher’s obsession for visiting every Canadian national park. Her colourful descriptions of these natural and cultural treasures fills me with wanderlust. Whether you’re planning a family trip to Banff or an expedition to Ellesmere Island, Park Bagger is a great resource to help you get the most out of your Canadian national park adventure.” — George Kourounis, Royal Canadian Geographical Society explorer in residence and chair of the Canadian chapter of The Explorers Club

“Before you explore Canada’s National Parks, you must purchase two things: a park pass and a copy of Marlis Butcher’s Park Bagger. The first item grants access to these great lands; the second provides the inspiration.” — Jeremy Kroeker, author of Motorcycle Therapy and Through Dust and Darkness