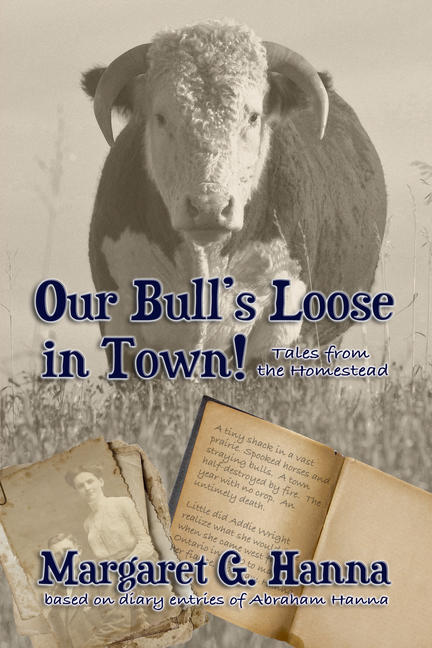 Little did Addie Wright realize what she would face when she came west from Ontario in 1910 to marry her fiancé, Abraham Hanna. Based on entries in Abraham’s diaries, Our Bull’s Loose In Town! tells the story of the author’s grandparents as they built their farm and raised a family in the Meyronne district of southwestern Saskatchewan. Through trials and triumphs, sorrows and successes, the horrors of the Great War, the prosperity of the Roaring Twenties and the dark years of the Dirty Thirties, they found strength and courage in their faith, in their indomitable humour, and in their family and neighbours.

I now live in Airdrie AB but I grew up just outside a tiny village in southwestern Saskatchewan, on the farm that my paternal grandfather homesteaded in 1910, in the house that he built between 1917 and 1926. I was a voracious reader and, through reading, I discovered archaeology. It sounded like the neatest, most fun way to spend one’s life. I have not been disappointed. After 12 years of university (McGill, U. of Manitoba and U. of Calgary), and after numerous summer jobs and contracts in both Manitoba, Alberta and Saskatchewan, I finally was hired as curator at the Royal Saskatchewan Museum in Regina. Among other duties, I was in charge of the development of the First Nations Gallery which required extensive and close collaboration with First Nations elders, artists, and dancers. My archaeological research focused on northern Saskatchewan where I worked with Cree families and communities. In 2005, I traveled to Cairo to visit friends. There, I crossed paths with another of their friends.  A year later, I was engaged to him. In August 2007, I married Roger Clayton of Airdrie, whose family has been here since the 1890s, and a month later I retired from the RSM and moved to Airdrie

Hanna's story, gleaned from her grandfather's journal's details the hardships and joys of life on the Canadian prairies in the early 1900s. Saskatchewan's history brought to life.